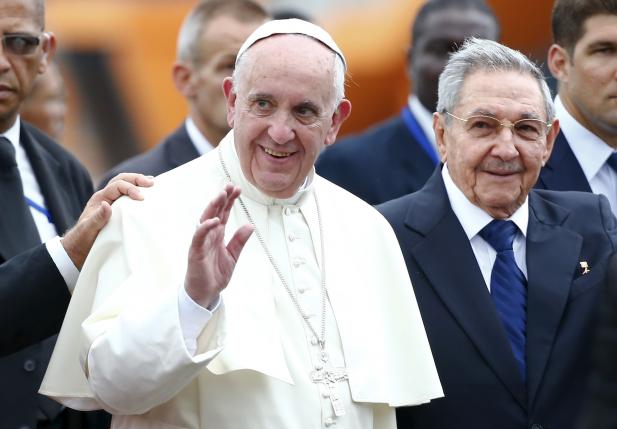 HAVANA - Pope Francis celebrates Mass with tens of thousands of Cubans on Sunday in Havana's Revolution Square, the political heart of Cuba where the Communist government stages its biggest rallies. The huge plaza is where Cubans celebrate May Day beneath massive portraits of revolutionary leaders Ernesto "Che" Guevara and Camilo Cienfuegos built into the facades of government buildings. To welcome the pope, a similarly giant poster of Jesus Christ was hung nearby. While Cuba's government basks in the glow of Francis' four-day visit, it is not clear whether Francis will use the stage on Sunday to criticise the Communist leaders on democracy and human rights. The pope may also visit retired leader Fidel Castro, 89. Arriving on Saturday, he exhorted Cuba and the United States to deepen their recent rapprochement, which he helped broker, and encouraged Cuba to grant more freedom to the Roman Catholic Church, which has re-emerged as a powerful force on the island after suffering decades of repression. Large, flag-waving crowds greeted the pope's motorcade, welcoming the first Latin American pope who will speak to Cubans in their common mother tongue of Spanish. Many Cubans appreciate the pope for his role in the secret talks that led to last December's historic detente, when Cuban President Raul Castro and U.S. President Barack Obama vowed to normalise relations and end more than half a century of Cold War-era animosity. Francis will fly from Cuba to Washington on Tuesday for meetings with Obama and addresses at the U.S. Congress and United Nations. Cuba will welcome any papal condemnation of the U.S. embargo of it, which persists despite Obama's policy change as only the U.S. Congress can lift it. The Republican leadership in Congress has defied Obama's calls to do so. DETENTIONS But Castro's government will also be sensitive to any criticism of its one-party political system or repression of dissidents. Police have detained between 10 and 20 dissidents to stop them from attending papal events and a similar number were threatened or warned, Elizardo Sanchez, head of the Cuban Commission of Human Rights and National Reconciliation, said on Saturday. Among them were three dissidents whose detention kept them from a meeting with the pope, said Berta Soler, leader of the dissident group Ladies in White. Instead of seeing Francis at the Vatican's diplomatic residence in Havana, Soler said she, Miriam Leyva and Martha Beatriz Roque were in police custody for several hours. "The Holy Father is not going to change anything in Cuba," Soler said. "We don't expect much from Francis because he comes here to talk about political matters between Cuba and the United States, not to resolve anything." The Ladies in White, who often skirmish with police after Mass on Sunday, plan to attend the papal Mass dressed in white. Although Francis did not overtly criticise the government on Saturday, he did say he would like his greeting "to embrace especially all those who, for various reasons, I will not be able to meet, and to Cubans throughout the world." He was clearly referring to Cuban exiles around the world, including the strident anti-communists concentrated in South Florida in the early years after the 1959 revolution led by Fidel Castro. Some believed he was also referring to political opponents of Cuba's government who are in prison. Cuba denies it holds political prisoners, but one dissident human rights group says as many as 60 are held in Cuban jails. -Reuters