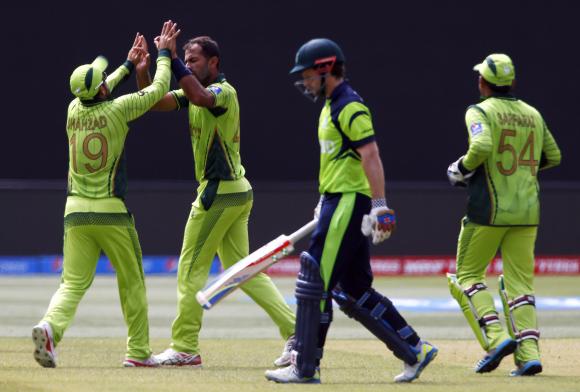 ADELAIDE - Ireland Captain William Porterfield hit his first World Cup century to help Ireland to 237 against Pakistan in their crucial Pool B match at the Adelaide Oval on Sunday. Opting to bat first in the do-or-die match for both teams, Porterfield struck 11 boundaries and a six in his seventh ODI ton to contribute nearly half of the team's total. In a match rendered a knockout contest after West Indies beat UAE in an earlier Pool B game on Sunday, Porterfield's decision to bat was a positive one but Ireland lost wickets each time a partnership appeared to be building. Unlike most of his team mates, the skipper picked up the length well and backed himself to go for his shots, one such instance had him swivelling to pull Sohail Khan for the first of the two sixes in the Irish innings. Ed Joyce was lucky early in his knock, dropped by a wrong-footed Ahmed Shehzad at point and surviving a strong caught-behind appeal. The 36-year-old could not make the most of his seemingly charmed life, however, and fluffed a pull shot to depart after making 11. Porterfield also needed some luck to bring up his 100. Batting on 94, the left-hander nearly ran himself out at the non-striker's end after abandoning his bid for a non-existent single. His century also came in streaky fashion with Porterfield driving the ball back to bowler Rahat Ali, who could not take the catch on his follow-through. The Ireland skipper eventually fell in the 39th over, Shahid Afridi rushing from the edge of the circle to take a low, diving catch after Porterfield had mistimed a drive off Sohail Khan. Garry Wilson then contributed 29, the second highest score for Ireland, but perished playing an uppercut to the third man fielder. Kevin O'Brien had the platform to enhance his reputation as a useful hard-hitting batsman but the right-hander, like a few of his team mates, was bounced out. Number 10 batsman George Dockrell was run out off the final delivery of an innings which would have folded earlier had Pakistan held on to all their catching opportunities. Wahab Riaz (3-54) was the most successful bowler for Pakistan while Umar Akmal spent a busy day on the field taking four catches. - Reuters