Portugal and Ukraine close in on Euro 2020 with home wins 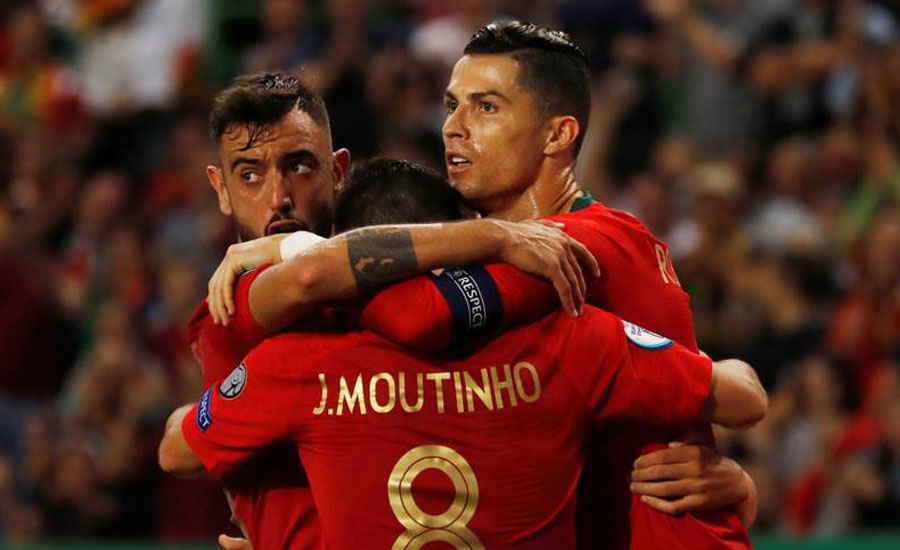 Portugal and Ukraine close in on Euro 2020 with home wins

LISBON (Reuters) - European champions Portugal and high-flying Ukraine edged closer to reaching next year’s European Championship with comfortable home wins in qualifying Group B. Ukraine sank Lithuania 2-0 to stay top of the group on 16 points from six games, followed by Portugal who are on 11 points from five matches after beating Luxembourg 3-0 with Cristiano Ronaldo among the scorers. Third-placed Serbia have seven from five, Luxembourg have four points from six games and Lithuania are bottom with one point from six matches. The Portuguese, who visit Ukraine on Monday, missed a string of chances to win by a bigger margin. Top scorer Ronaldo had been hoping to get two strikes to reach the milestone of 700 goals at club and international level. Ronaldo’s one goal, the second for Portugal on the night, demonstrated his class when a defensive blunder allowed the Juventus forward to race clear and beat goalkeeper Anthony Moris with a delightful lob from the edge of the penalty area. Moris produced a barrage of fine saves to keep the score respectable after Bernardo Silva pounced on a loose ball and steered it past two defenders on the line to fire the home side ahead in the 16th minute. Poor finishing coupled with Moris’s heroics kept Portugal at bay before Ronaldo netted his 94th international goal to reach the 699 mark at senior level and Goncalo Guedes sealed the win with an 89th-minute effort. Ukraine, who will qualify for Euro 2020 if they avoid defeat against Portugal on Monday, overpowered Lithuania thanks to a superb brace from Ruslan Malinovskiy. The midfielder broke the deadlock with a crisp left-footed shot after a one-two with Junior Moraes and made it 2-0 with a brilliant free kick around the wall into the far corner. In Monday’s other fixture, Serbia must win in Lithuania to retain any realistic hopes of qualifying.