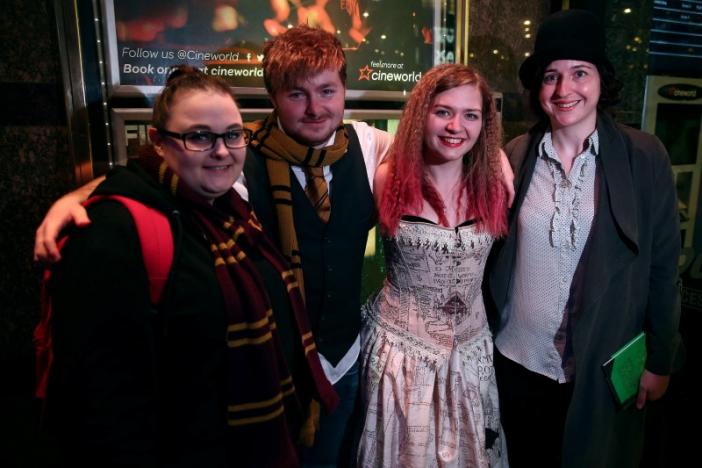 LOS ANGELES - After a new book and play revived "Harry Potter" mania earlier this year, fans of the boy wizard will get their first look at the Potter spinoff "Fantastic Beasts and Where to Find Them," a new film penned by JK Rowling. Potter-philes can attend coordinated events to see early footage from "Fantastic Beasts" at select IMAX theaters around the world in cities including Rome, Sao Paulo, Mexico City and New York. The free events are open to the public on a first-come, first-served basis. The screening will include a question-and-answer session with the cast in London and Los Angeles that will be broadcast at the same time in all the theaters. Not much is known about the plot of "Fantastic Beasts," which is set to open in theaters next month. The movie marks the screenplay debut of British author Rowling. The Warner Bros film, which stars Oscar-winner Eddie Redmayne as "magizoologist" Newt Scamander, is a spinoff from the Potter stories with new characters and plot, set in New York City in 1926. A trailer released at San Diego's Comic-Con gathering in July showed Scamander arriving in New York with a case of magical creatures that escape, wreak havoc and face threats from the nonmagical humans in the city. "Fantastic Beasts" revives the Potter film franchise that officially concluded with "Harry Potter and the Deathly Hallows: Part 2" in 2011. It cemented the end of Rowling's seven-book series which has sold more than 450 million copies worldwide. Potter fans who had grown up with the book series tearfully said goodbye to the orphaned boy wizard and his magical universe. But earlier this year, a new London play, "Harry Potter and the Cursed Child," cast a spell all over again. -Reuters