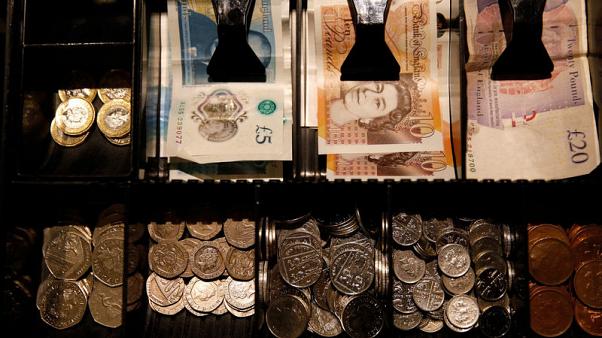 LONDON (Reuters) - Sterling will rise around 5.5 percent against the dollar if Britain and the European Union agree a divorce deal but will sink more than 6 percent if no agreement is reached. As predicted in numerous Reuters FX polls ahead of the June 2016 referendum, when Britons shocked markets by voting to part ways with the EU, cable is down about 7 percent since then and was trading around $1.28. With less than five months until the marriage is due to end, the two sides have yet to finalise a divorce settlement and if none is made by the end of March sterling will fall to $1.20, the poll found. However, economists polled by Reuters last month said there was only a one-in-four chance of a disorderly Brexit, where no deal is reached, and Thursday’s poll of foreign exchange strategists said the pound would bounce to $1.35 if a deal is made. “Our central forecasts are based on the expectation that there is a deal,” said Ryan Djajasaputra at Investec. “If you look at sterling there is a significant Brexit risk premium embedded within the currency and should you get a deal you see that effectively unwind.” However, traders hold a more negative view on the outlook for the pound than at any time since shortly after the Brexit referendum, according to options markets, as fears grow that Britain is headed for a disruptive exit from the EU. Medians in the wider Oct 29-31 poll of 56 strategists pegged sterling at $1.29 in a month, $1.34 at the end of April - a month after Britain leaves the EU - and $1.38 in a year. Those forecasts are little changed from an October poll but the 12-month horizon range is slightly wider, reflecting the ongoing uncertainty among speculators ahead of the divorce date. Adding to near-term downward pressure on the pound, the Bank of England is not expected to raise interest rates again until after Brexit. In contrast, the United States Federal Reserve is expected to raise borrowing costs again in December and follow that up with three more increases next year. While the European Central Bank is expected to end its asset purchases programme in December, it won’t start tinkering with record low interest rates until after June 2019. So against the euro EURGBP= the pound is expected to move little. It was around 88.5 pence and will be at 89.0p in a month, the poll said. In six months, the pound will have strengthened marginally to 87.9p and be at 88.0p in a year, according to the poll.