GUAYAQUIL - A powerful earthquake killed at least 77 people, injured hundreds more, ravaged coastal towns and sent residents fleeing for higher ground in Ecuador on Sunday. The 7.8 magnitude earthquake struck off Ecuador's Pacific coast and was felt hundreds of miles (km) away in the capital of Quito as well as in the large commercial city of Guayaquil, where rubble lay strewn in the streets and some buildings were cracked or partially collapsed. A bridge in the city collapsed on top of car, crushing it. The earthquake was Ecuador's worst in decades and officials said the death toll was likely to rise even higher as rescue teams headed into the hardest-hit areas. "It was terrifying, we were all scared and we're still out in the streets because we're worried about aftershocks," said Guayaquil security guard Fernando Garcia. "Everything is damaged." A state of emergency was declared in six provinces. The areas worst affected include Pedernales, which draws tourists with beaches lined with palm-trees and tropical thatch-hut restaurants, as well as nearby Cojimies. "There are villages that are totally devastated," Pedernales' mayor, Gabriel Alcivar, said in a radio interview. "What happened here in Pedernales is catastrophic." Ramon Solorzano, 46, a car parts merchant in the city of Manta, said he was getting ready to leave the city with his family. "Most people are out in the streets with backpacks on, heading for higher ground," he said, speaking in a trembling voice via a WhatsApp phone call. "The streets are cracked. The power is out and phones are down." The quake struck at a depth of 20 km (12.4 miles), and was followed by 55 aftershocks. 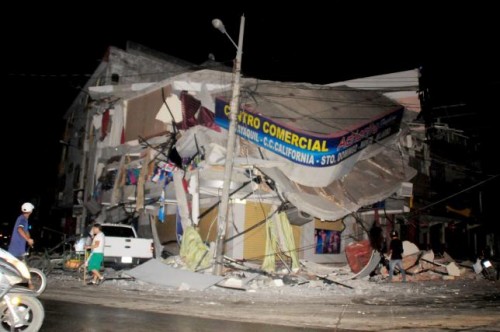 President Rafael Correa declared a national emergency and cut short a trip to the Vatican to coordinate the rescue efforts. "Everything can be rebuilt, but lost lives cannot be recovered, and that's what hurts the most," he told Ecuador's state television channel from Rome. "The material part is the least important, what is fundamental is guaranteeing human life." Parts of the capital were without power or telephone service for several hours, though the city government said that services were quickly restored and that there were no reports of casualties in the city. The government described it as the worst quake in the country since 1979, when 600 people were killed and 20,000 injured, according to the United States Geological Survey. A tsunami warning was lifted on Saturday night but coastal residents were encouraged to seek higher ground in case tides rise. The OPEC nation's oil production was not affected by the quake but that the principal refinery of Esmeraldas, located near the epicentre, had been halted as a precaution. Across the Pacific in Japan, a 7.3 magnitude tremor struck Kumamoto province early Saturday, killing at least 32 people, injuring about a thousand and causing widespread damage, in the second major quake to hit the island of Kyushu in just over 24 hours. The first, late on Thursday, killed nine. -Reuters