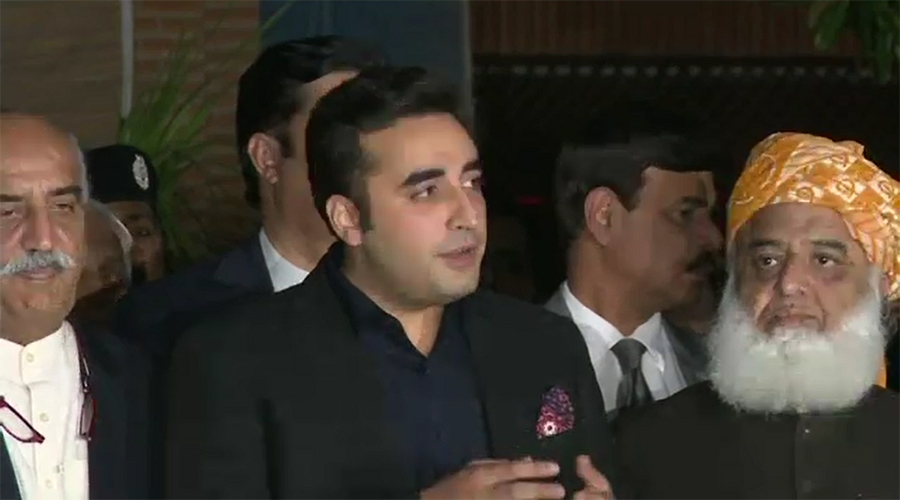 ISLAMABAD (92 News) – PPP chairman Bilawal Bhutto called on JUI-F chief Maulana Fazlur Rahman at latter’s house on Friday. Khurshid Shah, Jamil Soomro, Qamar Zaman Kaira, Farhat Babar and Faisal Kundi were also present. Talking to the media after the meeting, the PPP chairman appreciated the role of the Kashmir Committee for the resolution of the Kashmir dispute. He said that Maulana Fazlur Rahman also played an important role in an end to terrorism. “We have jointly worked for national interests. Maulana Sahib has worked with my father.” The PPP chairman said that Maulana Fazlur Rahman is his uncle. “There is no conspiracy. I used to meet him. I never think of saying an elected PM a traitor,” he said. He said that the minus-one formula had been in vogue in Pakistan. “Someone said that there should be the minus-one formula in my family as well. My maternal grandfather, Shahnawaz and Murtaza Bhutto were also victims of minus-one. Those saying minus-Zardari will say minus-Bilawal tomorrow,” he maintained. Bilawal said that Imran Khan had delivered a wrong message. Maulana Fazlur Rahman said that they had played an important role in uniting the nation on the Kashmir issue. “We will jointly work with consultation when we got an opportunity,” he said.