LAHORE (92 News) – Unidentified armed assailants have on Monday gunned down Pakistan People’s Party (PPP) leader Babar Sohail Butt in the provincial capital’s Lakhodair area in the Manawan police limits. As per details, Babar Sohail Butt was present in his house when some unknown armed men entered his house and opened firing leaving the local leader of PPP critically injured. He was rushed to Services Hospital where he succumbed to injuries. A large number of party workers gathered outside the Services Hospital after the incident. Police suspect the involvement of the Babar Butt’s gunman namely Atif Jutt in the cold blood murder. Babar Butt was a local leader of the PPP and had contested election for Member Provincial Assembly (MPA) from party ticket. His body was shifted to morgue for post mortem, while the police have registered an FIR of the incident. On the other hand, Asifa Bhutto Zardari, daughter of former president and Pakistan People’s Party (PPP) co-chairman Asif Zardari strongly condemned the incident. In her message on social media website, Aseefa Bhutto Zardari hoped that investigation will be conducted on merit and the killers will be brought to justice. 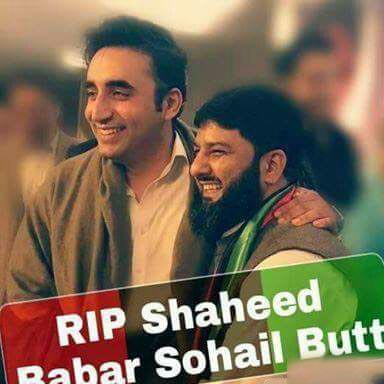 PPP chairman Bilawal Bhutto has said that the murder of Babar Butt and attack on Shaukat Basra are continuation of same consequences. Opposition Leader in the National Assembly Syed Khurshid Shah said that terrorist had always targeted the PPP. “People were massacred in Model Town. The government is causing damage to the Federation and bureaucracy, which are dangerous for the state,” he maintained.