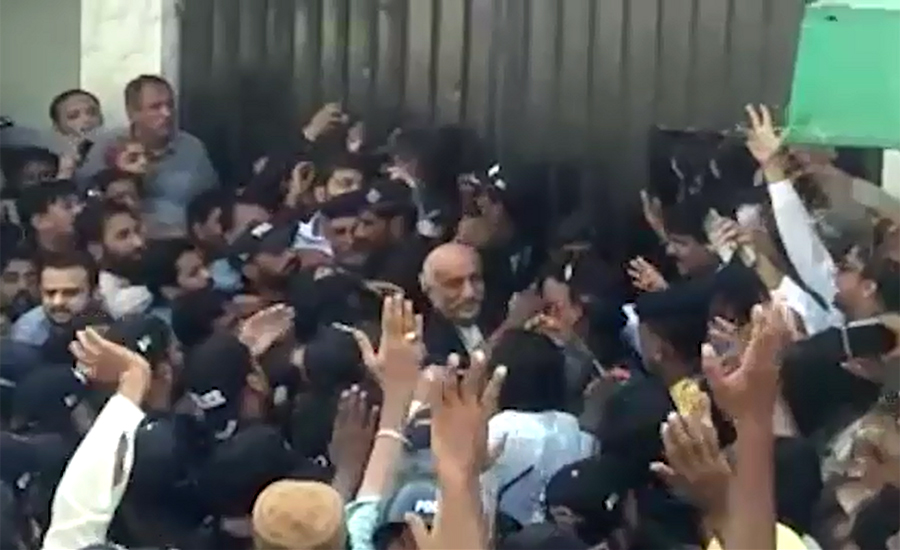 SUKKUR (92 News) – An accountability court on Saturday remanded PPP leader Syed Khurshid Shah in the custody of the National Accountability Bureau (NAB) for nine days. The NAB had requested 15-day remand of the PPP stalwart. He will again be presented in court on October 1. The court has allowed Khurshid Shah to use homemade food and medical facilities. The court has allowed Khurshid Shah’s family to meet him. On Friday night, the National Accountability Bureau (NAB) had shifted PPP leader Syed Khurshid Shah, who was arrested in a case of assets beyond known sources of income, to Sukkur from Islamabad. A team led by Sukkur NAB DG Mirza Irfan Baig shifted him to NAB Office. The officials did not allow his relatives to meet him at the airport. He was taken to the rear gate of the airport and taken to NAB office in a vehicle. Nobody could know about his exit from the airport. PPP workers and media persons were stopped several kilometers away from the airport. Talking to the media, he said that the NAB had accused me of having misappropriated Rs500 billion. “The NAB should give me only 15 percent and keep the other amount with it,” he said. PPP leader Syed Khursheed Shah was discharged from Polyclinic in Islamabad. Khursheed Shah was discharged from the hospital on the basis of his medical tests whose results were normal. They said his blood pressure, sugar level, and heartbeat were normal as per tests. The PPP leader, who is in NAB custody on two-day transit remand, would be brought to Sukkur where he will be presented before the accountability court concerned. It is worth mentioning here that the PPP leader who has been taken into custody in assets beyond known source of income case by NAB was brought to the Polyclinic after he complained of high blood pressure and sugar level along with stomach problem Thursday evening. Earlier on Thursday, an accountability court (AC) in Islamabad approved two-day transit remand of Pakistan Peoples’ Party (PPP) senior leader Khursheed Shah in assets beyond known sources of income case. Khursheed Shah will be shifted to Sukkur for investigation. The NAB prosecutor had requested for three-day transit remand. “How much time will it take to fly to Sukkur,” asked Judge Bashir. To this, the NAB investigating officer said they will take the PPP stalwart on the first available flight to Sukkur.  The court then granted two-day transit remand of the PPP leader to NAB. A day earlier, the Rawalpindi and Sukkur NAB jointly arrested PPP leader from his residence at Bani Gala, Islamabad. Khursheed Shah faces the charge of possessing assets beyond known sources of income and having ‘benami’ properties. The NAB had summoned Khurshid Shah on Wednesday, but he excused from appearing before the NAB.