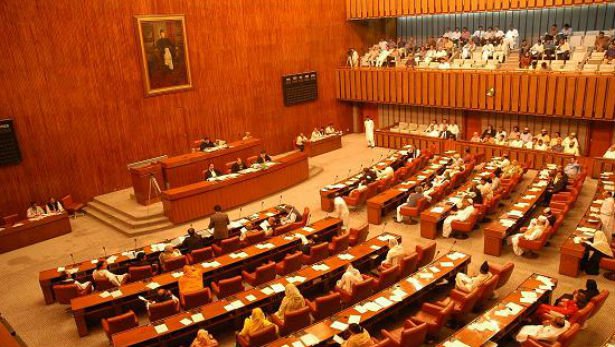 ISLAMABAD (92 News) – The Pakistan People’s Party (PPP) being a majority party with 27 seats in the Senate has geared up to grab the slots of the chairman and deputy chairman on March 12. The PPP leaders consulted the ANP and PML-Q for forming a grand alliance. In addition, they also contacted the MQM, the JUI and the PTI for the purpose. The Pakistan Muslim League-Nawaz (PML-N) is at the second place with 26 seats, followed by the Muttahida Qaumi Movement (MQM) with eight seats. The Awami National Party is at No 4 with seven seats. The Pakistan Tehrik-e-Insaf (PTI) and the Jamiat Ulema-e-Islam-Fazl (JUI-F) have six and five seats respectively. Moreover, the Pakistan Muslim League-Quaid (PML-Q) has four seats, while the Pakhtunkhwa Milli Party and the National Party have three seats each. The Jamaat-e-Islami, the Baloch National Party-Mengal (PNP-M) and the Muslim League-Functional have one seat each. The voting for four seats of the FATA was postponed for an indefinite period. On the other hand, the PML-N has the backing of small parties in Balochistan.