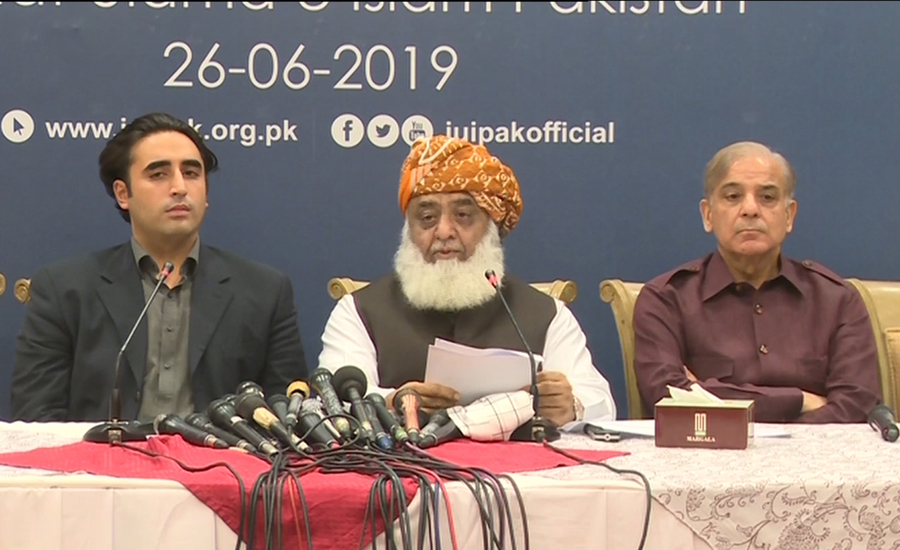 ISLAMABAD (92 News) – Rejecting the stance of the stance of Jamiat Ulema-i-Islam-F (JUI-F) over ‘Azadi March’, the Pakistan Peoples’ Party (PPP) suggested to summon all parties conference (APC) to discuss the long march. The PPP showed differences with the JUI-F march and the latter has called for convening another APC to discuss the possibilities of launching anti-government protest campaign from the platform of the joint opposition. The sources said that the demand of APC came when some JUI-F members contacted the PPP leaders. They reacted strongly to the statements by some JUI-F leaders in which they had alleged that the PPP was staying away from next month’s long march in order to please some forces to strike a deal. The contact was established by the JUI-F after PPP Secretary General Nayyar Bokhari issued a statement earlier in the day, terming the criticism from the JUI-F “uncalled for” and “regretful”. Bokhari said the JUI-F leaders should not issue “objectionable” statements against the opposition parties which had participated in all the previous APC’s that had been convened by Maulana Fazlur Rehman.

On the other hand, PML-N Senator Pervaiz Rasheed has said that his party will support Maulana Fazlur Rahman’s anti-government protest. In 92 News Program ‘Ho Kaya Raha Hai’ on Monday, he said that an all-parties conference should be held to bring all parties closer to each other. He said that they trust the decision of Maulana Fazlur Rahman. “The impression of Bilawal’s refusal to support the sit-in of Maulana Fazlur Rahman is not correct. Bilawal has assured of support in the sit-in which will strengthen the movement,” he said. PML-N Senator said that Maulana had forwarded the traditions of his father. “We launched the march for restoration of judges from Lahore and achieved the results on arrival in Gujranwala,” he said. He said that pressure is increasing on the government with each passing day. “Pakistan was not like this before the government of Imran Khan. Modi did not dare to change the status of Occupied Kashmir during his five-year previous tenure,” he said.