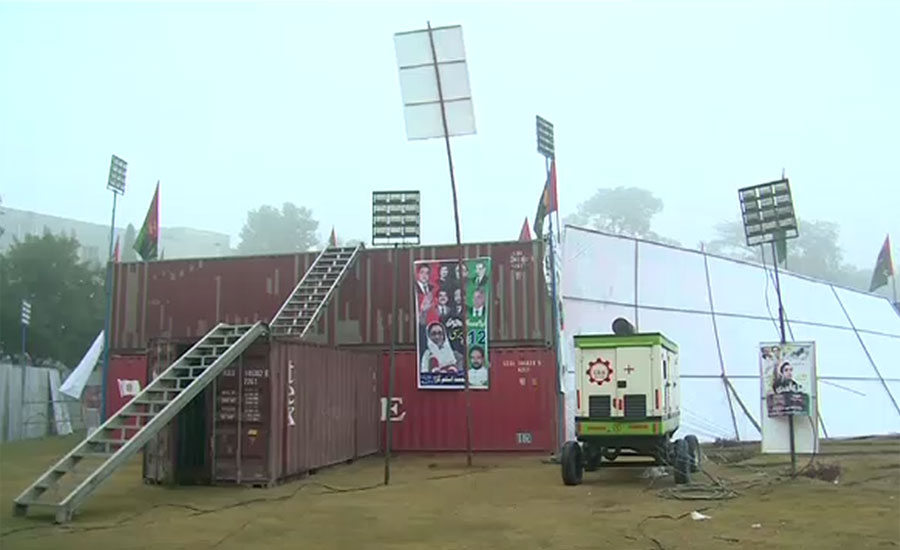 RAWALPINDI (92 News) – The Pakistan People’s Party (PPP) will hold a public rally at Rawalpindi’s Liaquat Bagh instead of Garhi Khuda Bakhsh today (Friday) on 12th death anniversary of former premier late Benazir Bhutto. Late Benazir Bhutto is being remembered on her 12th death anniversary today. PPP will hold a rally in Liaquat Bagh, where the former prime minister was assassinated in a gun and bomb attack in Rawalpindi on December 27, 2007. It is noteworthy that every year, PPP holds a public meeting or rally at Garhi Khuda Bakhsh to mark Benazir Bhutto’s death anniversary. However, this year the day has assumed more significance as chairman of the party and Bhutto’s son Bilawal Bhutto Zardari has selected the same venue for the public meeting where his mother was assassinated. The PPP has finalized arrangements to mark Benazir’s death anniversary in a befitting manner at the Liaquat Bagh. The PPP workers from across the country are reaching Rawalpindi to attend the public meeting. Two stages have been prepared to for the party leaders. The main stage, which is 100 feet long and 60 feet wide, would accommodate the party chairman Bilawal Bhutto and PPP central command while the second stage is for other party leaders. PPP chairman Bilawal Bhutto and other party leaders will address the gathering. The venue has been decorated with party flags and posters of Zulfikar Ali Bhutto and Benazir Bhutto. According to PPP local leadership, more than 15,000 chairs have been placed at the venue to accommodate the workers. Tight security arrangements have been made for the occasion. Sources said that more than 3,000 security personnel would be deployed inside and around the venue. Meanwhile, Murree Road will remain closed from Committee Chowk to Marir Chowk for all kind of traffic. Meanwhile, the Sindh government has announced a public holiday on account of the death anniversary of the former premier.

Born on June 21, 1953 in Karachi, Benazir Bhutto was the eldest child of former premier Zulfikar Ali Bhutto, who founded PPP. Benazir completed her early education in Pakistan and then went to United States for higher studies. She graduated from Harvard University with a BA in comparative government. Later, she completed a course in international law and diplomacy from Oxford University. After she returned to Pakistan in 1977, she was placed under house arrest after military coup overthrew her father’s government. A year later, General Mohammad Zia-ul-Haq ordered the execution of her father for allegedly authorising the murder of an opponent. Eventually, she inherited her father’s leadership of PPP. However, strict restrictions were imposed on her family due to which she moved to England in 1984 and returned on April 10, 1986, and campaigned for elections. Benazir took oath as the first female prime minister of Pakistan on December 2, 1988. She was also the first woman to lead a Muslim state and twice served as the prime minister of Pakistan. She married Asif Ali Zardari on December 18, 1987, and the couple has three children; Bilawal, Bakhtawar and Aseefa.