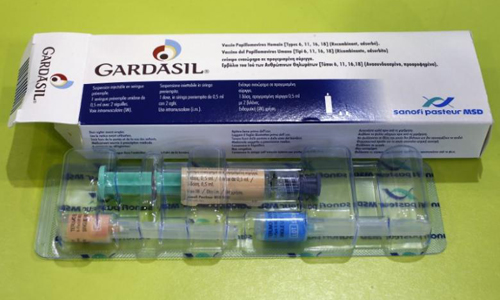 NEW YORK- Two doses of a vaccine that protects against cervical and several other types of cancer are enough for 11-to 12-year-olds, rather than the previous three-shot regimen, the U.S. Centers for Disease Control and Prevention said on Wednesday. Vaccines against the human papillomavirus, or HPV, Merck & Co Inc's Gardasil and GlaxoSmithKline Plc's Cervarix, have been available for years, but acceptance by the public has been slow. "Safe, effective, and long-lasting protection against HPV cancers with two visits instead of three means more Americans will be protected from cancer," CDC Director Tom Frieden said in a statement. "This recommendation will make it simpler for parents to get their children protected in time." The CDC now recommends that 11- to 12-year-olds receive two doses of HPV vaccine at least six months apart. Adolescents aged 13 and 14 can also receive the two-dose schedule, but teens and young adults who start the series later, at ages 15 through 26 years, will continue to need three doses, the agency said. HPV is among the most common sexually transmitted diseases. Most infections do not cause symptoms and go away on their own, but the virus is still a leading cause of cancer deaths among women worldwide. Since the virus can also cause genital warts and cancers of the anus and mouth/throat, the vaccine is recommended for both sexes. In the United States, the HPV vaccine is recommended for children aged 11 or 12, with the goal of protecting them against the virus before they become sexually active, and also for teens and young adults who may not have previously been vaccinated. -Reuters