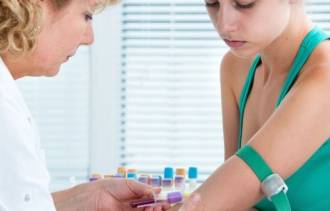 CALIFORNIA - A new genetic test that sequences the blood of pregnant women for signs of diseases such as Down Syndrome in their fetuses are turning up unexpected results: a diagnosis of cancer in the mother. In as many as 40 cases, women who took Sequenom Inc's MaterniT21 test, which scans their genetic code and that of their fetus, had abnormal changes that could signify cancer. In at least 26 of these women, that test turned out to be accurate. Such tests from Sequenom and other companies, sequence the mother's blood, which includes both the mother's DNA and fetal DNA from the placenta. The unintended detection of disease lends weight to the idea that some cancers can be traced through non-invasive tests, when tumors shed their DNA into the bloodstream. Dr Eunice Lee, 40, a San Francisco anesthesiologist, was one of those women. Speaking at the Scripps Future of Genomic Medicine Conference, Lee said she was hoping for a normal result for her baby. Instead, Sequenom advised her to seek cancer screening. A full body MRI identified a large tumor in her colon, which doctors removed in the 15th week of her pregnancy. Sequenom's chief scientific officer, Dr. Dirk van den Boom, said the company is gathering data on the other women whose tests indicated abnormalities. So far, he said he is not aware of any false positive results. Other researchers have had similar findings. Scientists at the University of Leuven in Belgium developed a blood test for signs of Hodgkin's lymphoma after detecting the illness in pregnant women. Dr. Diana Bianchi of Tufts University said the noninvasive prenatal tests represent the "biggest clinical implementation of genomic medicine to date," with more than 1 million having been performed since 2011. Other companies offering such tests include Illumina, privately held Natera and Ariosa Diagnostics, acquired by Roche in December. –Reuters