LAHORE (92 News) – As Eidul Azha is just around the corner, the preparations are in full swing with many looking for a sacrificial animal that may not only be in accordance to the religious requirement but also suitable to their respective budgets. For the majority of citizens, though, Eid preparations meant finding a good place to celebrate. Malls too became increasingly crowded with people enjoying various family shows particularly organized for Eid celebrations. The administration of major cities has designated specific places for animal markets where faithful in large number are buying animals for sacrificing on Eidul Azha. Every seller is looking for an edge, every buyer for a trick. Both sides also seem to be swept up in the excitement of the holiday ritual, when Muslims of the world over will slit the throat of an animal and distribute its meat to friends, relatives and the needy. 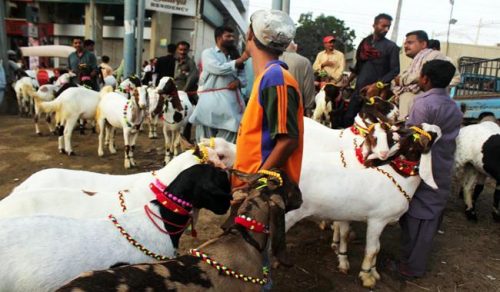 People especially children are showing great interest in getting the animals of their choice. On the other hand,the sale of sacrificial animals is gaining momentum as rush of buyers has been witnessed in cattle markets set up at designated places across the country. According to a survey of different sale points, vendors are leaving a very narrow bargaining margin for buyers. They are acting as a cartel by keeping the price of low weight goats high. The points set up at different localities across the country are catching thousands of customers on daily basis but only few succeeded to purchase. Customers said that the prices are likely to come down in case a large number of animals arrive in the twin cities before Eid. Now, the trend of `Ijtamai Qurbani’ is also becoming popular in the twin cities.