KARACHI (92 News) – A 17,000 tons fleet tanker named ‘PNS Moawin’ was commissioned during an impressive ceremony held at Pakistan Navy Dockyard, Karachi. President Dr Arif Alvi graced the occasion as chief guest. Chief of the Naval Staff Admiral Zafar Mahmood Abbasi was also present on the occasion. ‘PNS MOAWIN’ is the largest warship ever constructed in Karachi Shipyard and Engineering Works, in collaboration with M/s Savunma Teknologiler Muhendisilik (STM) of Turkey. The ship is capable of performing a variety of maritime operations, including provision of logistic support to other ships at sea through transfer of fuel and other important military cargo. 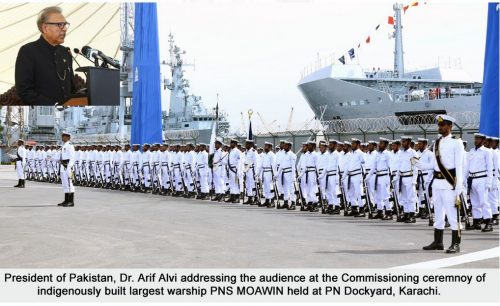 It can carry two helicopters. The ship is also equipped with state-of-the-art medical facilities and can provide overseas support to friendly countries during any Humanitarian Assistance and Disaster Relief. During his welcome address, Chief of the Naval Staff Admiral Zafar Mahmood Abbasi highlighted that Pakistan Navy has been striving to achieve self-reliance in warship construction. Construction of various Naval platforms like F-22-P frigates, submarines and combat support ships in Pakistan in past and various warships and submarine construction projects planned in future will substantially enhance our ship building capability. 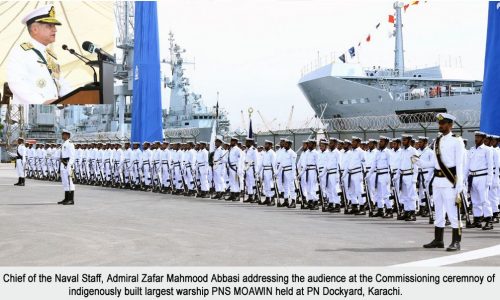 Addressing the ceremony, the President said that Pakistan is blessed with immense maritime resources which can be optimally exploited through development of our maritime sector or the blue economy. “The development of this sector will enhance our exports, generate employment and increase foreign exchange,” he added. He said: “With the realization of CPEC, the maritime trade and activity off our coast will increase manifold which calls for a strong Navy to provide security and seaward defence. The government will provide all necessary resources to enhance the capability of Pakistan Navy and help develop our maritime sector.” 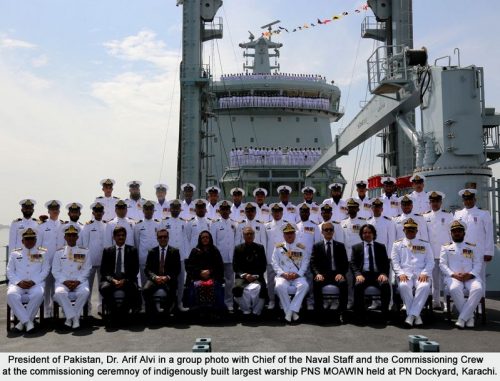 The chief guest further said that Pakistan and Turkey have time tested and deep rooted relationship and joint ventures like PNS MOAWIN will further strengthen these relations and open new vistas of cooperation. The President also congratulated Ministry of Defence Production, Pakistan Navy, M/s STM of Turkey and Karachi Shipyard for constructing this 17,000 ton ship in Pakistan. 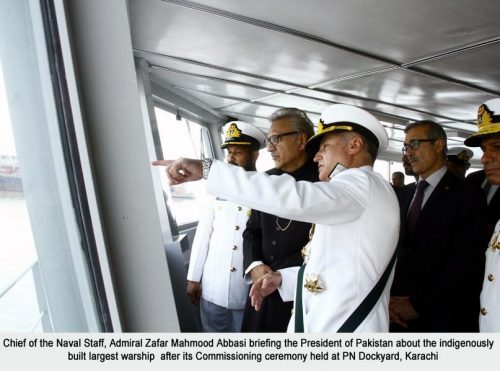