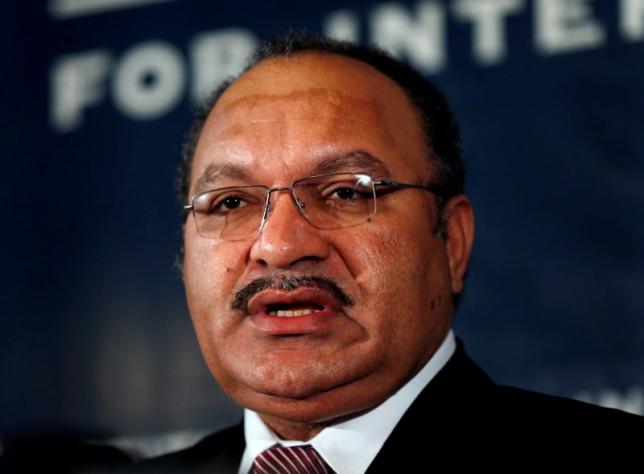 SYDNEY - Attempts by Papua New Guinea's opposition to oust Prime Minister Peter O'Neill over corruption allegations gained steam on Friday as five lawmakers defected from his government and a motion of no confidence was served against him in Parliament. Parliament has been in recess since last month, when protests by university students boiled over into violent clashes with police and about 40 people were injured, including four with bullet wounds. O'Neill appeared to be holding out until August, when a one-year grace period before an election would have come into force, protecting his government. But this week, the Supreme Court ruled the manoeuvre unconstitutional and ordered Parliament recalled. Parliamentary Speaker Theo Zurenuoc, from O'Neill's People's National Congress, accepted the no-confidence motion and ordered Parliament adjourned for seven days in accordance with the law, the state-run National Broadcasting Corp reported. There are signs that O'Neill, who needs 56 of the 111 votes in the chamber to survive, is under pressure. Ben Micah, leader of coalition partner the People's Progress Party, defected to the opposition with his five MP's just moments before the session opened. But there were no signs the lodging of the no-confidence motion would have any immediate impact on a strike by aviation, maritime and public transport workers that has effectively cut off the rugged, mountainous nation. While organisers of the strike have said they intend to expand it to other industries if the motion were to fail, it is the spectre of political violence that has the country most on edge. Student protest leader Noel Anjo told Reuters the opposition had no intention of entering into confrontation with the authorities. "We are not organising any protests," he said. "The speaker has to accept the notice from the committee and follow the norms, the processes of a vote on no confidence." O'Neill came to power in 2011 promising to rein in corruption but is facing allegations he authorized millions of dollars in fraudulent payments to a law firm. In 2014, an anti-corruption watchdog issued an order for his arrest over the incident, which O'Neill denies. He declined to submit to the warrant and ordered the watchdog stripped of its funding. Papua New Guinea is developing lucrative resource projects with energy majors ExxonMobil and Total that have made it a major gas producer. However, corruption and violence are endemic in the island nation of seven million people, raising concern about its long-term stability. -Reuters