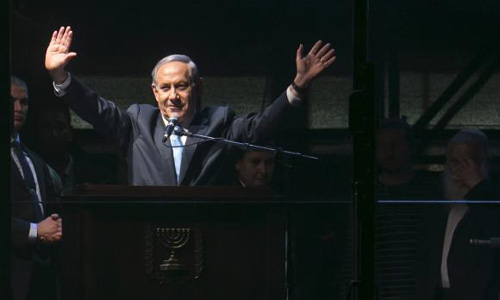 TEL AVIV (Reuters) - Israeli Prime Minister Benjamin Netanyahu, trailing in opinion polls two days before a parliamentary election, on Sunday implored right-wing voters to turn out and "stop a left-wing government from coming to power." Speaking to a rally of thousands of supporters of Israel's right-wing parties from behind a bulletproof screen at Tel Aviv's main square, Netanyahu warned that the right-wing government he leads could be voted out of office. "Our rivals are investing a huge effort to harm me and the Likud, to open a gap between my party, the Likud, and (our rivals), and if we don't close this gap, there is a real danger that a left-wing government will rise to power," Netanyahu said. Final opinion polls published on Friday predicted the center-left Zionist Union led by Isaac Herzog and Tzipi Livni would take between 24 and 26 seats in Tuesday's vote, compared to 20-22 seats for Likud. No single party has ever won an outright majority in Israel's 120-seat Knesset and the party leader with the best chance of forming a coalition would lead the new government. While admitting he is trailing in the polls, Netanyahu is hoping that right-wing parties can narrow the gap sufficiently for him to be nominated by Israel's president to form the next coalition and win a fourth term as prime minister. Earlier on Sunday, he publicly offered the Finance Ministry portfolio to Moshe Kahlon, a potential king-making rival from a newly formed centrist party. But Kahlon dismissed the offer as pre-election spin. Even if Likud is outnumbered, Netanyahu is counting on a larger right-wing bloc to support his bid for another term and Kahlon, with around 10 seats in the polls, could tilt things in his favor. After realizing he was trailing his opponents in the polls, Netanyahu launched a media blitz to counter the apparent rising tide of support for the Zionist Union, his main opponent. "This is a fateful struggle, a close struggle, we must close the gap, it is possible to close this gap," Netanyahu told the cheering crowd holding banners and waving flags. Unofficial estimates put the turnout at 15,000-30,000. "Most of the public do not want (Livni and Herzog) as prime ministers of Israel and want to see me continuing as the leader of the country and prime minister," he asserted. Netanyahu's campaign focus on security issues and the threat from Iran's nuclear program has failed to inspire voters, who consistently say that economic issues, including soaring house prices and the high cost of living, are their chief concerns.