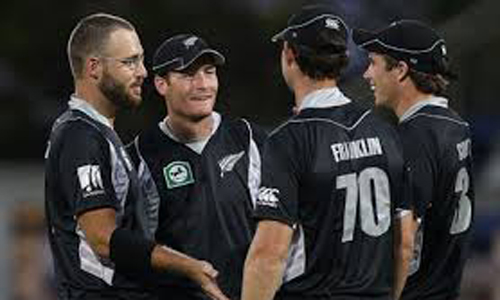 WELLINGTON – New Zealand's Brendon McCullum expects favouritism, underdog status and the possibility of choking under the weight of expectation to have little influence on Saturday's World Cup quarter-final against West Indies. A rampant New Zealand went through pool phase unbeaten, while inconsistent West Indies lurched into the last eight clash at Wellington Regional Stadium with a six-wicket victory over United Arab Emirates. To McCullum, though, that meant nothing. "I've said right throughout the tournament, whether you're favourites or whether you're underdogs, once the coin goes up, the contest between bat and ball starts," the New Zealand skipper told reporters on Friday. "All of that talk and all of that pre-match favouritism goes out the window. Tomorrow's no different, just because it's a quarter-final." The co-hosts have arguably the most balanced side in the World Cup, all of whom have stepped up at one stage or another during the tournament. That has particularly pleased McCullum. "In horse racing parlance ... I think the horse has never been better and we've got every chance in this game to be able to go out there and win, even if things aren't a hundred per cent," McCullum said. "That's something you probably can't say about too many New Zealand teams in the past. That's encouraging." McCullum has indicated that New Zealand will revert to their top lineup, with fast bowler Adam Milne returning from shoulder injury to join new ball duo Trent Boult and Tim Southee in place of Mitchell McClenaghan. Southee somehow managed to exploit a clear blue sky and little wind to produce a captivating spell of late-swing bowling to take career-best figures of 7-33 against England at Wellington Regional Stadium a month ago. Boult was imperious in their match against Australia with 5-27 the following week in Auckland, while left-arm spinner Daniel Vettori has complemented the opening pair with 13 wickets at 13.29, and an economy rate of 3.69. West Indies, by contrast, have struggled in the top-order batting with most of the runs from top-scorers Chris Gayle and Marlon Samuels coming in one big partnership against Zimbabwe in Canberra. Gayle, who is struggling with a back injury, has scored 279 runs with 215 coming from that one innings, while Samuels' 133 not out has accounted for 66 percent of his total runs of 203. West Indies captain Jason Holder said the key to the game could be to take early wickets when McCullum comes out firing and then get stuck into the middle order. "Obviously Brendon McCullum's carrying some form ... we will be our normal self in the power play, we just have to be disciplined," Holder said. "I think aggression is also key. Brendon is a pretty aggressive batsman so I can probably try to fight fire with fire and try to get the better of him. "New Zealand's middle order (also) hasn't been tested in this tournament and so it's important that we get early wickets and test them." –Reuters