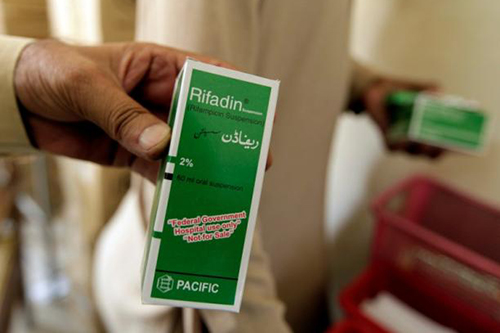 ISLAMABAD – Swiss pharmaceuticals firm Novartis AG said it has stopped making tuberculosis drugs in Pakistan in a dispute over pricing, prompting fears of a health crisis due to a shortage of drugs in a country with the world's fifth-highest TB rates. As in many developing countries, the Drug Regulatory Authority of Pakistan (DRAP) sets prices for about 320 critical medicines. But pricing caps have not been significantly raised since 2001, making it unviable for firms to make many of the drugs. The issue has become particularly acute for TB drugs. Of 18 companies licensed to manufacture TB drugs in Pakistan, only four, including Novartis, were making them this year, said Ayesha Haq, executive director of Pharma Bureau, a trade group representing 20 firms in Pakistan. Doctors and public health officials said shortages could lead to a rise in drug-resistant strains of TB with tens of thousands of patients missing doses mid-treatment. The drugs include combinations of antibiotics as well as substitutes for patients with complications. "It's an emergency in the making," said Naseem Salahuddin, an infectious disease doctor in Karachi. With a population of 190 million, Pakistan has around 500,000 TB patients every year, according to the World Health Organization. Rana Iftikhar Anjum, a resident of Multan in Punjab province, said it took him weeks to track down TB drugs for his 15-year-old niece, and Muhammad Rafiq, a pharmacist at a leading Islamabad hospital, said he had to pay 2,000 rupees ($19) in bribes to get the drugs for his brother, who suffers from multi-drug resistant TB, from a government hospital. RECOMMENDED WORKAROUND Novartis spokesman Dermot Doherty said the company, which controls around 30 percent of Pakistan's TB drug market, was looking to exit the business, and Ahsan Raees, in charge of the company's regulatory affairs in Pakistan, blamed the production halt on the price dispute. "If they had given us the price increase, we would never have done this," he said. Pfizer Inc, which controls another 30 percent of the market, has also seen supply disruptions in recent months, adding to shortages, spokeswoman Trupti Wagh said. She did not elaborate on the disruptions, but said they were resolved last month. She declined to say whether the pricing dispute was a factor. A local TB drug maker, Schazoo Zaka, also partially cut production because of the pricing dispute, said Ejaz Qadeer, who heads Pakistan's anti-TB program. Schazoo Zaka did not respond to a request for comment. While TB medicine is available in government hospitals, at least a third of patients rely on private clinics, where the drugs are hard to come by, health officials and patients said. DRAP Chief Executive Muhammad Aslam said he has recommended a workaround to the health ministry for companies to raise prices for some critical medicines, and a decision could come next month. PRICING POLICY Pakistan has raised critical drugs prices on an ad hoc basis over the past 15 years when companies have asked, but drugs firms say those increases have not been enough. Haq, the lobbyist, said companies were seeking an average 30 percent increase for regulated drugs to make production viable. Formed in 2012 to oversee drug regulation, DRAP this month instituted a first annual price increase since 2001, with increases pegged to inflation, which last year was at a 46-year low of 2.86 percent. Last month, DRAP also allowed for an 8 percent increase in TB drug prices under a hardship clause, which drug companies can apply for once every three years. DRAP's Aslam acknowledged that price increases so far were not enough. About 18 months ago, DRAP recommended that at least three dozen drugs be put under a new 'orphan drug' policy - for medicines developed to treat rare diseases, and typically with no price cap, so as to give manufacturers an incentive to produce for a small market. "Anti-TB drugs, cardiac drugs, anti-cancer drugs - these are critically needed," Aslam said. TB is not classified as a rare disease in Pakistan, but listing it as an orphan disease would allow companies to get around current regulations and sell TB drugs at cost price. Sajid Hussain Shah, a ministry spokesman, said work was ongoing on the policy.–Reuters