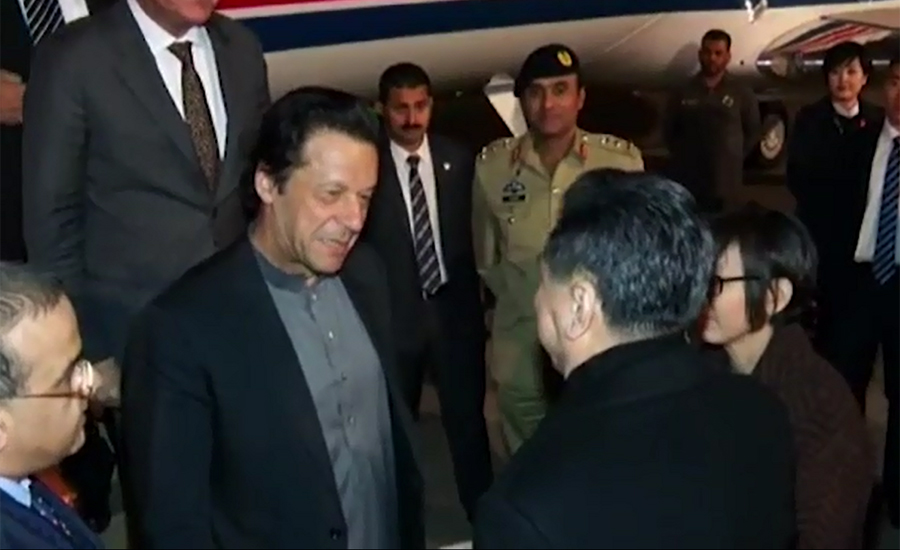 ISLAMABAD (92 News) – Prime Minister Imran Khan reached Beijing on a four-day official visit on Thursday night. Shah Mehmood Qureshi, Asad Umar, Khusro Bakhtiar, and Sheikh Rashid, the ministers of foreign affairs, finance, planning, and railways, respectively, as well as Abdul Razak Dawood, the advisor to Khan on commerce, textiles, industries production and investment, and Balochistan Chief Minister Jam Kamal are accompanying the prime minister during his visit to China. The Foreign Office (FO) spokesperson said that this would be the first official visit of the prime minister to China after assuming office in August this year. He will be accompanied by a high-level delegation including the foreign minister and the minister for planning and development. The visit signifies the closeness and traditional warmth which characterizes Pakistan-China all weather strategic cooperative partnership. During the visit, Prime Minister Imran Khan will hold meetings with Chinese President Xi Jinping and Premier Li Keqiang. The two sides will review the entire range of bilateral relations which have enjoyed a long history of mutual trust and support. The two sides will also sign several Agreements and MoUs of Cooperation in diverse fields. After his visit to Beijing, the prime minister will visit Shanghai to participate in First China International Import Expo, where Pakistan is exhibiting a wide range of export products. Prime Minister Khan will be a keynote speaker at the inauguration of the Expo. On the sidelines of Shanghai Forum, the prime minister will also hold meetings with other world leaders. He will also hold meetings with leaders of Chinese financial and corporate sector. It was reported that the traditionally close, cooperative and friendly ties between Pakistan and China are based on shared principles and mutual interests entailing close cooperation in diverse fields. It added that both the countries maintain close and regular strategic communication for promotion of regional peace and stability and economic cooperation. Economic and industrial cooperation between Pakistan and China expanded significantly after the launching of China-Pakistan Economic Corridor. Prime Minister Imran Khan’s visit is expected to provide further impetus to enhance the existing strategic ties between the two countries and break new grounds for broadening the bilateral partnership. He will visit the Monument to the People's Heroes at Beijing's Tiananmen Square and also meet the chairman of the National People's Congress on November 3. On November 4, the PM will speak at the Central Party School before leaving for Shanghai to participate in the first China International Import Expo. The premier will be a keynote speaker at the inauguration of the expo, and among 18 heads of state and government who will be attending the expo. More than 2,800 companies from 130 countries and regions, and 160,000 buyers from over 80,000 Chinese and foreign companies will participate in the expo.