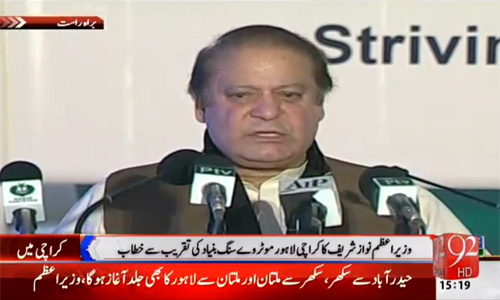 KARACHI (92 News) - Prime Minister Nawaz Sharif laid the foundation stone of Karachi-Lahore Motorway (M-9) at Toll Plaza on Wednesday. Addressing the ceremony, the prime minister said that the project was his dream several years ago. “In the first phase, the M-9 will be constructed from Karachi to Hyderabad and later it will be stretched to Lahore. The project will cost Rs36 billion and will be completed in 30 months.” The prime minister said that they also want to link M-9 to Balochistan. He bemoaned that Pakistan has not made progress, while the neighbouring countries had made a lot of progress. “We will get 3,600 megawatts from Liquified Natural Gas (LNG). We will also get 3,000-4,000 megawatts from China through the transmission line. We will get energy from coal as well.” He said that the FWO personnel had constructed roads in Balochistan, putting their lives at risk. “Distances between provinces will be reduced through the construction of roads.” He said that preparations are being made to construct a motorway from Khunjerab to Gawadar. “We are also trying to complete the Malir Expressway speedily, which will link the port to M-9.” The prime minister said that security forces were eliminating terrorism bravely. “We are facing three challenges – economy, energy and terrorism. We are also fighting a war against terrorism and extremism. May Allah Almighty bless us with success,” he prayed. Nawaz Sharif said: “We should learn a lesson from mistakes committed in the past.” Earlier, Sindh Governor Dr Ishratul Ebad and Chief Minister Syed Qaim Ali Shah welcomed the prime minster at the airport.