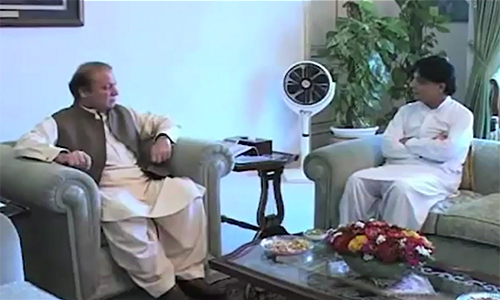 ISLAMABAD (92 News) – Prime Minister Nawaz Sharif reached Islamabad after the Belarus tour on Wednesday. Ch Nisar welcomed the prime minister at Noor Khan Airbase and informed him about the situation arising after the MQM resignations. Later, both went to Prime Minister House by the same vehicle. Meanwhile, the prime minister has summoned a meeting to discuss the resignations issue on Thursday. Meanwhile, Ch Nisar contacted MQM leader Farooq Sattar and assured him of removing the resignations. Ch Nisar will also reply to accusations and reservations of the MQM in the National Assembly. Farooq Sattar said that Altaf Hussain has the power to withdraw the resignations.