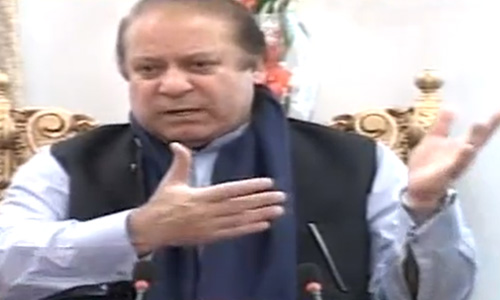 ISLAMABAD (92 News) – Prime Minister Nawaz Sharif has announced his support for Raza Rabbani of the Pakistan People’s Party (PPP) for the Senate chairman. Addressing a meeting of the leaders of parliamentary parties on Tuesday, he said: “We do not want to bring our chairman and deputy chairman, but we want consensus.” The prime minister said that all the stakeholders should sit and hold consultations to bring a consistent policy over national issues. “We should also learn from the opposition’s critical aspect if it is positive,” he said. “In 2013, all of us saw that the outgoing government shook hand with the new one. Such tradition has been witnessed first time in the country and it should be repeated in future.” The prime minister said that they want to take the country ahead through consultation. “Today we are paying the price for mistakes committed in the past. Pakistan cannot bear more mistakes,” he added. Nawaz Sharif claimed that they had earlier tried to unite all stakeholders to stop the use of money in the Senate election. “Everybody knows that who became a member on the basis of money. There is need to introduce reforms in this regard. We have formed a committee headed by Ishaq Dar for introducing reforms and we need cooperation of all the stakeholders,” he said.