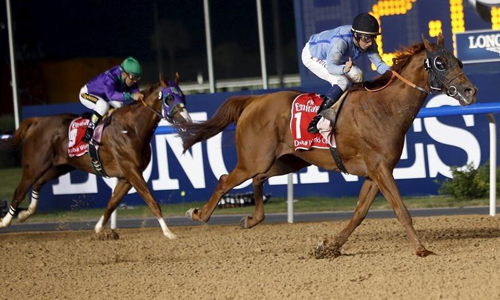 DUBAI - Prince Bishop, ridden by William Buick, won the $10 million Dubai World Cup by two and three-quarter lengths on Saturday as the 12-1 outsider sprinted clear of California Chrome, the 2014 American Horse of the Year. California Chrome, ridden by Victor Espinoza, was the 6-4 favorite to triumph in the world's richest horse race, but the Kentucky Derby and Preakness champion could only finish second, one and a quarter lengths ahead of Lea, piloted by Joel Rosario. "He was slow away from the gate but we worked our way out down the back -- we had a lot of ground to make up," said jubilant jockey Buick. "He's a very tough horse. He's got a huge heart and gave me his all today." Prince Bishop, trained by Godolphin's Saeed bin Suroor, completed the 2,000 meter contest in two minutes 03:24 seconds at the opulent 60,000-capacity Meydan racecourse. The full field of nine finished the race. The eight-year-old gelding is owned by Dubai Crown Prince Sheikh Hamdan bin Mohammed al-Maktoum, whose other runner Long River trailed in seventh. Japan's Hokko Tarumae, with Hideaki Miyuki in the saddle, set the early running, but could not maintain that pace. California Chrome was tucked in second and saw off the fading challenge of defending champion African Story, the Goldolphin-owned eight-year-old finishing a disappointing sixth, but had no response to Prince Bishop's charge. "We brushed by him pretty quick," said Buick. "I went into the race thinking that he (California Chrome) could be a doubtful stayer so when I went I was going to stretch my horse and make him work and at the end of the day the best horse won." The race was staged for the first time on a new dirt track, which was installed to help attract more runners from North America. "I am very, very pleased with my horse. He got caught wide," California Chrome co-owner Steve Coburn told Reuters after the race. "You cannot win every time. He got to his job and he did it well," he said, adding there were no plans for his next outing. Assistant trainer Alan Sherman added: "You always want to win. We tried hard but they had a home field advantage." Lea, another American runner installed as the second favorite, came home third for trainer Bill Mott, who won the inaugural running of the World Cup with Cigar in 1996. - REUTERS