ISLAMABAD (Reuters) – Prince William said that the United Kingdom and Pakistan share ‘unique bonds’ in a speech at the country’s national monument in Islamabad on Tuesday evening during a five-day visit with his wife Kate. Prince William spoke of the warm welcome and delicious food they had experienced in Pakistan after arriving on Monday evening and visiting local school children and Pakistan’s Prime Minister Imran Khan. “The UK and Pakistan share unique bonds and so it will always be in our best interests for you to succeed,” William said at the event hosted by the British High Commission, adding that 1.5 million people living in the UK had Pakistani heritage and the UK was one of Pakistan’s top investors. “You can rely on us to keep playing an important role as a key partner and your friend.” https://www.youtube.com/watch?time_continue=2&v=3JQc88iMhQE William also mentioned the looming challenge of climate change to Pakistan, as well as the importance of women having access to education, two themes of a trip which has been described by palace officials as the most complex the couple have undertaken due to security issues. The Duke and Duchess of Cambridge arrived at the hilltop monument in a rickshaw painted with the Pakistani and UK flags. Prince William wore a teal sherwani suit, a long dress coat worn over trousers, while the Duchess of Cambridge wore a dress by British designer Jenny Packham in deep green, the colour of Pakistan’s flag. 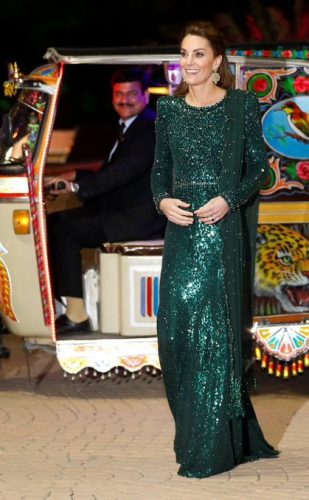 Earlier in the day the couple met Prime Minister Imran Khan, a former international cricket star who the prince played cricket with in London as a child, at his official residence. William’s mother Princess Diana, a hugely popular figure in Pakistan, visited Pakistan several times in the 1990s and helped Khan raise money for a cancer hospital. “While welcoming the royal couple, Prime Minister Imran Khan recalled the love and affection among the people of Pakistan for Princess Diana, because of her compassion as well as commitment to support charitable causes,” PM office said in a statement. He had also brought up geopolitical issues such as India’s decision to revoke the autonomy of its portion of the disputed region of Kashmir in August and attempts to secure peace in neighbouring Afghanistan. 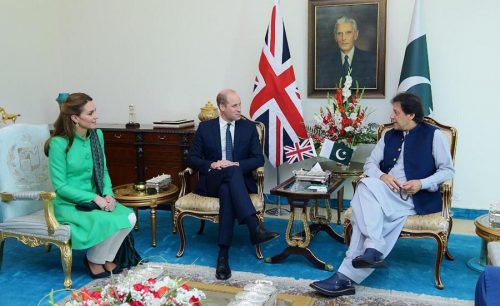 Earlier William and Kate met students at an Islamabad Model College for Girls, discussing education with a group of older students and visiting the classrooms of younger students, admiring their drawings. As they left, a group of girls sang one of Pakistan’s national songs and the couple greeted kindergartners who had lined up to chant ‘bye bye’. While visiting the school a 14-year-old student told William she and other students were ‘big fans’ of Princess Diana, who died in a car crash in 1997. “Oh that’s very sweet of you. I was a big fan of my mother too,” he replied. 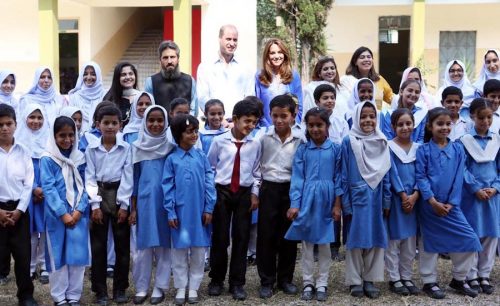 They then visited the Margalla Hills National Park on the edge of Islamabad, which is under threat from poaching, wildfires, invasive species and littering. For the morning events, Kate wore a periwinkle blue silk shalwar kameez, the national outfit of Pakistan consisting of a loose tunic worn over trousers. Many on social media and in the fashion industry had been hoping she would don the outfit, which Princess Diana had worn during visits. The designer, Maheen Khan, said on Twitter: “It is an honour to have been asked to create this outfit for the Duchess.” The Duchess of Cambridge’s fashion choices, including a bright green tunic over white pants to meet with the Prime Minister, appeared to echo many of the colours and outfits worn by Diana.