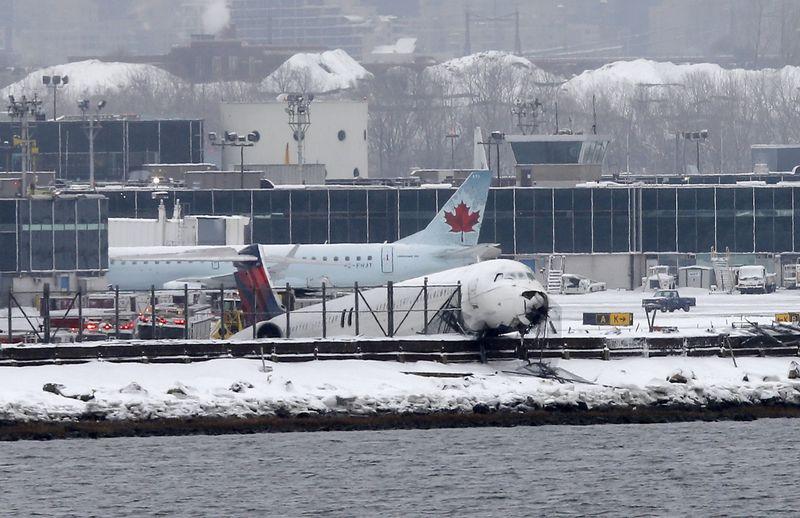 (Reuters) - A Delta Air Lines Inc (DAL.N) jet landing during a snowstorm at New York's LaGuardia Airport on Thursday slid off the runway and struck a fence before coming to rest on a snow-covered embankment just feet from the frigid waters of Flushing Bay. None of the 127 passengers and five crew members were seriously injured as Delta flight 1086 from Atlanta skidded on the tarmac at about 11 a.m. EST (1600 GMT). Images on local media showed the plane's nose had pushed through a chain-link fence and was jutting out over an embankment. LaGuardia, the smallest of the New York area's three major airports, was immediately closed after the mishap. By the time its runways started to reopen at about 2:30 p.m. EST, air traffic was snarled throughout the U.S. East Coast and beyond. Hundreds of flights were cancelled at LaGuardia, compounding weather-related travel disruptions in many parts of the country. "I think the pilot did everything he could to slow the aircraft down," said Patrick Foye, executive director of the Port Authority of New York and New Jersey, the airport's operator. "Obviously, the pilot's and the co-pilot's good efforts were reflected in the fact that there were only minor injuries." After exit slides failed to deploy properly, passengers were forced to disembark by climbing over a wing with the help of emergency responders, Foye said at a news conference. There were only two minor injuries reported, he said, though that number may change. One of those on board was Larry Donnell, a professional football player with the New York Giants. "We were all shocked and alarmed when the plane started to skid, but most importantly, as far as I know, all of the passengers and flight crew were able to exit the plane safely," the tight end said in a statement released by the team.