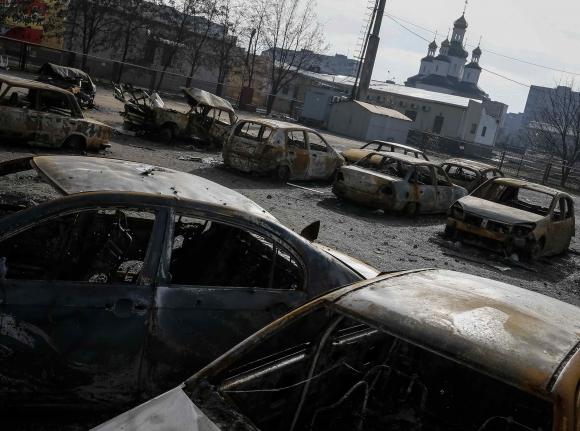 KIEV/SAKHANKA, UKRAINE (Reuters) - Pro-Russian separatists are building up forces and weapons in Ukraine's south east and the Ukrainian military said on Saturday it was braced for the possibility of a rebel attack on the port city of Mariupol. The Kiev military accused Russia on Friday of sending more tanks and troops toward the rebel-held town of Novoazovsk, further east along the Sea of Azov coast from Mariupol, expanding their presence on what it fears could be the next battlefront. A rebel attack on Mariupol, a city of half a million people and potentially a gateway to Crimea, which Russia annexed last March, would almost certainly kill off a European-brokered ceasefire. The ceasefire, which came into force last Sunday, has already been badly shaken by the rebel capture on Wednesday of Debaltseve, a railway junction in eastern Ukraine, forcing a retreat by thousands of Ukrainian troops in which at least 20 Ukrainian soldiers were killed. Mariupol is the biggest city still under government control in the two rebellious eastern provinces. Novoazovsk, where Kiev said Russia was reinforcing, lies 40 km (25 miles) to the east along the coast near the Russian border. Military spokesman Andriy Lysenko did not refer specifically to the movement of Russian tanks and troops but said the separatists, who Kiev says are supported by Russian weapons and fighters, were conducting sabotage and intelligence operations round the clock to test government defenses. "The adversary is carrying out a build-up of military equipment, weapons and fighters in the Mariupol area with the aim of a possible offensive on it," Lysenko told journalists. "They are sending out small sabotage groups out almost every night. We can see the activities of the enemy around Novoazovsk where military hardware, fighters and ammunition are being amassed," he said. One Ukrainian soldier had been killed and 40 others had been wounded in attacks in eastern Ukraine by the separatists in the past 24 hours, he said. REBEL BASE A Reuters media team in Sakhanka, half-way between Mariupol and Novoazovsk, were told by rebels that one of the local roads had been closed "because of fighting" though no shooting or shelling could be heard. Some rebels had formed a base in a complex of houses in Bezimenne further up the coast and there were dozens of well-armed fighters milling around, some of whom looked like Russian military special forces wearing Russian army patches and insignia on their uniforms. There were no signs of a new influx of tanks and troops in the region as mentioned by Kiev on Friday. A couple of military trucks could be seen on the road from Novoazovsk to Mariupol and an armored personnel carrier was parked in a forest near Shyrokine also on the coastal road. In Bezimenne, one rebel fighter who gave his nom de guerre as Boxer denied the Kiev reports of more Russian tanks and fighters being sent to the area. "It's all a lie. The only people fighting here are miners, tractor drivers and farm workers," he said. He said rebel fighters were observing the Minsk ceasefire agreement worked out by Ukraine,Russia, Germany and France in the Belarussian capital and had pulled back heavy artillery from the Mariupol area The United States, which is considering tightening sanctions against Russia and arming Kiev, also says it has sighted Russian reinforcements in the south east. The State Department said Russian support for the rebels was undermining international diplomacy and would bring costs on Moscow. Western nations have held out hope they can revive the Minsk peace deal, even though the rebels ignored it by seizing Debaltseve in one of the worst defeats for Kiev in the 10-month-old war. The heightened tension in Ukraine's south east came on the first anniversary of the overthrow of the Moscow-backed Viktor Yanukovich, which triggered Russia's annexation of Crimea and the outbreak of pro-Russia rebellions. More than 5,000 people have been killed in the ensuing conflict. More than 100 people were shot dead in Kiev in protests before Yanukovich fled for Russia, exactly a year ago. While Poroshenko used the solemn occasion on Friday night to re-affirm Ukraine's commitment to a future in Europe, pro-Kremlin organizations staged a rally in Moscow to condemn Yanukovich's ousting. Organisers said around 20,000 took to the streets in a march to show their support for the rebels in eastern Ukraine and condemn Yanukovich's ousting as illegal.