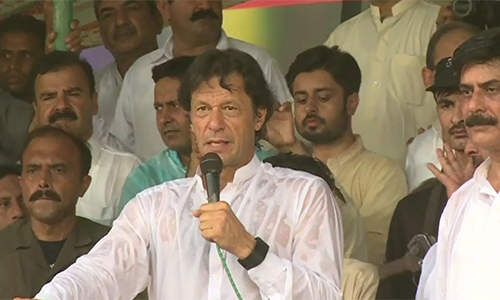 VEHARI (92 News) – PTI chairman Imran Khan has said that country’s problems cannot be resolved till restoration of vote’s sanctity. Addressing Farmers Convention on Saturday, he said that the powerful community is occupying the country’s resources. “The rulers are apathetic to the masses. Farmers should raise voice for their rights. Poverty cannot be eliminated till helping the farmers,” he said. Criticizing the Punjab and Sindh government, Imran Khan said that farmers are controlled by the police in Punjab and Sindh. “Farmers should support the PTI and we will eliminate the injustice of police,” he said. He said that he would establish a cotton research institute after coming to the power and it would be run by people related to agriculture, not the government. The PTI chairman said that the country was facing the water problem. “We will not only construct the controversial Kalabagh Dam but also consult other provinces to resolve the water issue,” he said, adding that Bhasha Dam was not controversial and they would try to complete it at the earliest. Severe mismanagement was witnessed when food was served to the participants after the departure of Imran Khan. Meanwhile in tweets, Imran Khan said that the PTI will pursue the issue of child abuse in Parliament. “If we cannot protect our children and instead police protect perpetrators of abuse, then we are becoming an inhumane and depraved society,” he said. The PTI chairman said that local politicians and police were involved in silencing protesters. “We strongly condemn these horrific acts of child abuse and police complicity,” he added.