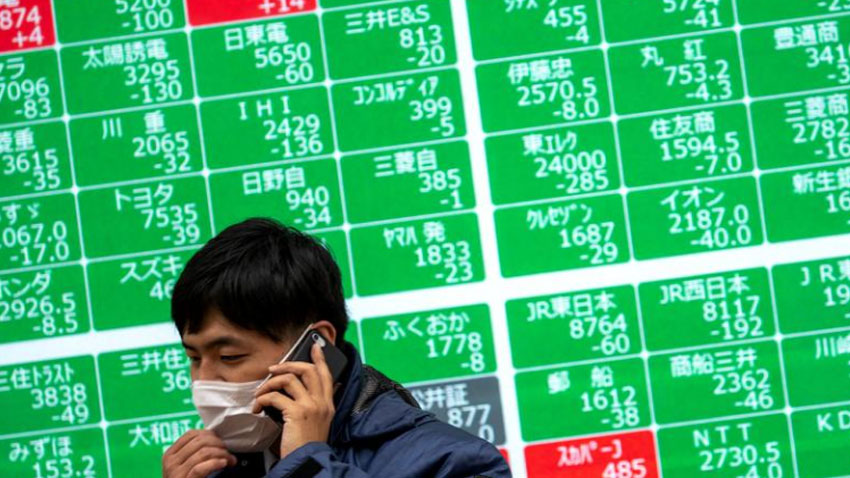 SINGAPORE/MIAMI (Reuters) - Bond markets steadied, the US dollar fell and stocks edged ahead on Wednesday after central banks from Washington to Wellington vowed to keep monetary policy loose for a long time, giving investors enough confidence to seek out riskier assets.

US Federal Reserve Chair Jerome Powell told Congress on Tuesday the economy remained “a long way” from employment and inflation goals and that rates would stay low and bond buying proceed apace until there was “substantial further progress”.

The Reserve Bank of New Zealand on Wednesday made no changes to its rates or bond purchase programme either and said policy will need to remain stimulatory until inflation is sustained at 2% and employment hits maximum levels.

Taken together, it was enough to reassure investors that authorities won’t rush to raise rates even if inflation accelerates.

Risk-sensitive currencies rose, pushing the kiwi, Aussie and sterling to their highest levels since early 2018, while the safe-haven Japanese yen slipped.

MSCI’s broadest index of Asia-Pacific shares outside Japan, which has drifted 1.2% lower over the week as rising yields pressured valuations, rose 0.3% and S&P 500 futures rose 0.1%.

Powell did not seem too fussed about the selloff that has driven the 10-year yield up by 40 basis points this year, telling lawmakers it was a statement on the market’s confidence in the pandemic recovery.

But he cautioned that was a ways off and said markets would get plenty of warning about any future policy adjustments.

His comments reversed a morning sell off on Wall Street, and the S&P 500 closed 0.1% higher, although the Nasdaq, which is full of growth stocks more sensitive to higher yields, finished Tuesday down 0.5%.

“The overall takeaway from Powell is that over the next couple of months he will just keep singing the same dovish commitment song,” said Edward Moya, senior market analyst at OANDA in New York.

“Until we see more than half of the 10 million jobs come back, Powell won’t change his tune.”

In currency markets, the Australian dollar hit a three-year high of $0.7945 and the New Zealand dollar made the same milestone, reaching $0.7378. Sterling, which has been boosted by Britain’s vaccine rollout, briefly leapt as high as $1.4295, its best since April 2018.

Cryptocurrency bitcoin nursed losses at $49,700 after a two-day selloff.