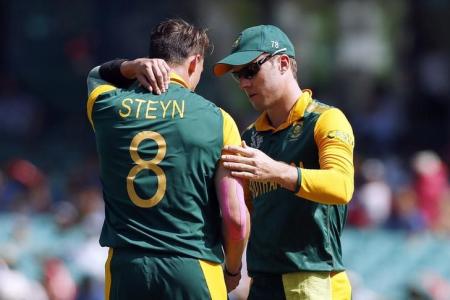 DURBAN – Dale Steyn and AB de Villiers have been recalled to South Africa's one-day international side for the visit of New Zealand later this month, but young wicketkeeper Quinton de Kock has been axed after a poor run of form in Bangladesh. New Zealand will play three ODI matches against the Proteas between Aug. 19-26, after the sides face off in two Twenty20 internationals. Steyn and fellow seamer Vernon Philander return to one-day duty after missing the series in Bangladesh. De Villiers will be back from paternity leave to skipper the side but the Proteas will be without all-rounder JP Duminy and fast bowler Morne Morkel for the 50-over series as they both await the births of their first children. De Kock, who has already lost his test place to Dane Vilas, will be sent on South Africa's 'A' tour of India to regain his batting form after repeated failures at the top of the order. He has been replaced by 36-year-old Morne van Wyk, who played his last ODI in 2011 but did feature for the Twenty20 side against West Indies in January. "Quinton de Kock remains an outstanding talent but we feel that the South Africa 'A' tour of India presents the best opportunity at this stage of his career for him to rediscover his form," Cricket South Africa selection convener Linda Zondi said in a press release on Tuesday. Spinner Imran Tahir will play the 50-over matches but not the Twenty20 contests, where a further opportunity is being given to Eddie Leie, who had a promising debut against Bangladesh. The first Twenty20 will be played in Durban on Aug. 14, with the second two days later in Pretoria. ODI squad: Kyle Abbott, Hashim Amla, Farhaan Behardien, AB de Villiers (captain), Faf du Plessis, Imran Tahir, David Miller, Aaron Phangiso, Vernon Philander, Kagiso Rabada, Rilee Rossouw, Dale Steyn, Morne van Wyk, David Wiese Twenty20 squad: Kyle Abbott, Hashim Amla, Farhaan Behardien, AB de Villiers, Faf du Plessis (captain), JP Duminy, Eddie Leie, David Miller, Morne Morkel, Aaron Phangiso, Kagiso Rabada, Rilee Rossouw, Morne van Wyk, David Wiese. –Reuters