Protesters across US call on Trump to reunite immigrant families 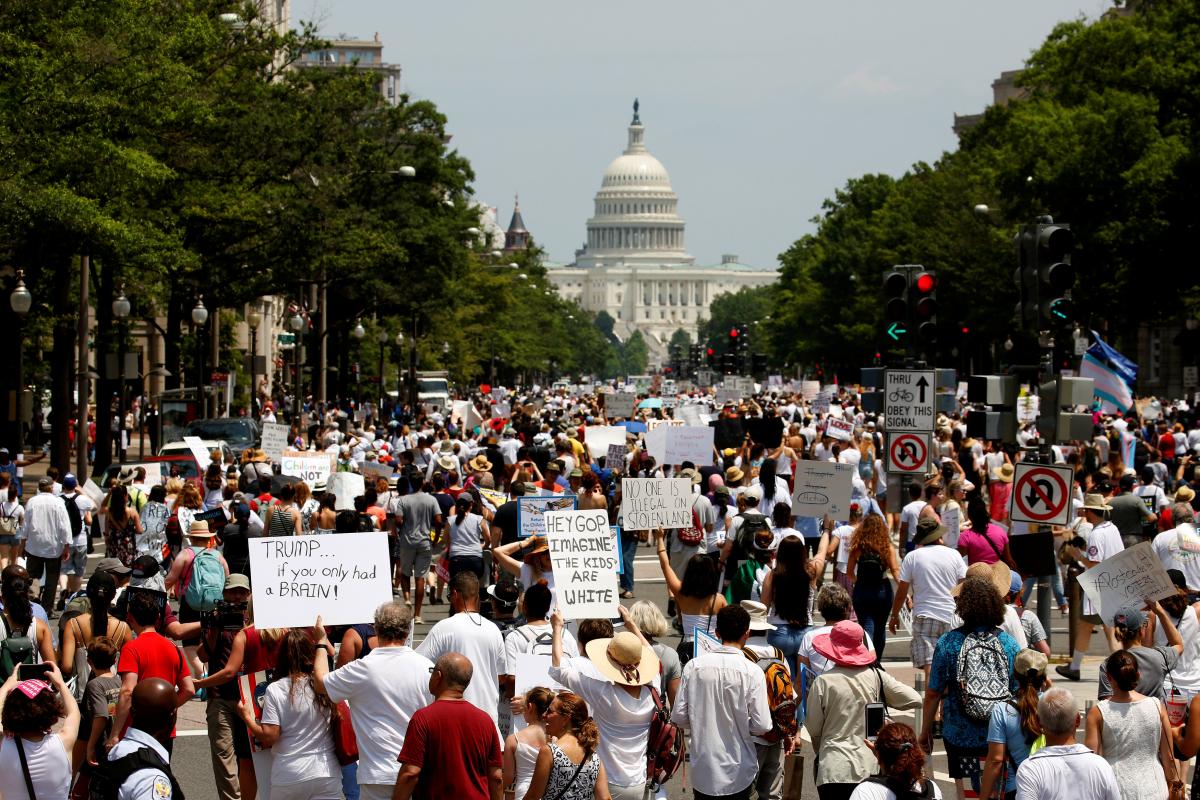 Protesters across US call on Trump to reunite immigrant families

WASHINGTON (Reuters) - Tens of thousands of protesters marched in cities across the United States to demand the Trump administration reverse an immigration crackdown that has separated children from parents at the US-Mexico border and led to plans for military-run detention camps. Outside the White House, protesters waved “Families Belong Together” signs and chanted “Shame!” as religious leaders and activists urged the administration to be more welcoming of foreigners and to reunite families. “The way they treat families, the way they treat immigrants, that’s not America,” said protester Aneice Germain of President Donald Trump’s tough stance on immigration, a cornerstone of his 2016 election campaign and his presidency. Trump was out of town at a golf club he owns in Bedminster, New Jersey. Trump says illegal immigration fosters crime and he implemented a “zero tolerance” policy in May to prosecute all immigrants apprehended for entering illegally. That led to the separation of more than 2,000 children from their parents, causing an outcry this month, even from some allies of the Republican president. In a rare retreat on an issue that fires up his conservative base, Trump on June 20 ordered officials to detain families together. Thousands of protesters in New York marched across the Brooklyn Bridge bearing signs with slogans like “Make America Humane Again” and “Immigrants Are Welcome Here.” On the US-Mexico border, demonstrators partially blocked a bridge connecting El Paso, Texas with Ciudad Juarez in Mexico. In Chicago, thousands gathered to march toward the offices of federal immigration authorities. “I’m here because families belong together,” said Cindy Curry of Westchester, Illinois.A federal judge has ordered families be reunited and the administration asked the military to house immigrant families, leading the Pentagon to mull the construction of soft-sided camp facilities. Organizers estimated 30,000 people had gathered in central Washington. The peaceful protest appeared to be the largest pro-immigration demonstration in the US capital since at least 2010, when activists rallied to pressure then-President Barack Obama and Congress to overhaul the US immigration system. A splinter group of several dozen protesters in Washington went to protest at what they said was the residence of Stephen Miller, a White House adviser known for his hardline views on immigration. It was the latest in a string of public protests against Trump administration officials. Since taking office in 2017, Trump has overseen an increase in arrests of people suspected of being in the country illegally. His administration is also approving fewer family visas. Immigration has been on the rise in America and across much of the developed world for decades, roiling politics in recent years in Germany, Britain and the United States. Immigrants made up about one in 20 US residents in 1970. By 2016, their share rose to about one in seven, according the US Census Bureau. On Twitter , Trump criticized the handful of Democratic politicians who have called for the US Immigration and Customs Enforcement agency known as ICE to be eliminated. “You are doing a fantastic job of keeping us safe by eradicating the worst criminal elements,” he wrote in part of the post addressed to ICE employees.