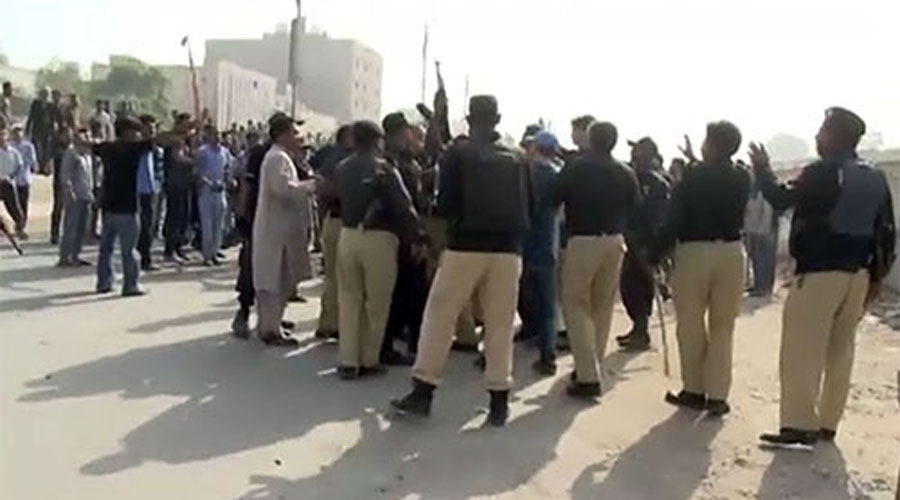 KARACHI (92 News) – The Majlis-e-Wahdat-e-Muslimeen (MWM) on Monday staged a protest at Karachi’s Malir 15 area against the arrest of its leaders in a crackdown. The police tried to negotiate with the MWM leaders but they refused to call off the protest sit-in. The police then resorted to shelling and fired in the air in order to disperse the protesters at which the protesters got agitated and in return stoned the police. The police has called a rapid response force to disperse the people while talks are underway between the protesters and people. The police will start an operation if the protesters do not agree to call off the protest. The participants of the protest also tried to stop a passenger train. There was a massive traffic jam at Shahrah-e-Faisal and National Highway due to this clash. A large number of students and citizens could not reach their schools and work places respectively. Following the new wave of unrest, the law-enforcement agencies (LEAs) have on Sunday apprehended several persons including political and religious leaders in Karachi’s different areas during the last three days. The LEAs had also detained former Pakistan People’s Party (PPP) leader Faisal Raza Abadi, Nazimabad Jamia Masjid Noor Emaan Khatib Allama Mirza Yousaf Hussain and religious party leader Taj Hanfi. Sindh Rangers carried out a search operation in Nagin Chorangi and detained Ahle-Sunnat Wal Jamaat (ASWJ) leader Taj Hanfi, while raids are being carried out for the arrest of another Ahle-Sunnat Wal Jamaat leader Rab Nawaz Hanfi. Earlier, LEAs during an operation in Nizamabad area of Karachi arrested Jamia Masjid Noor Emaan Khatib Allama Mirza Yousaf Hussain from his house.