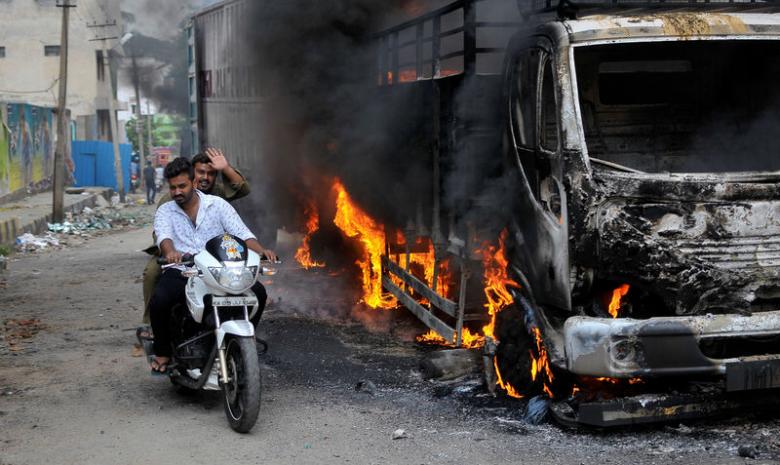 BENGALURU – Riots broke out in the Indian city Bengaluru on Monday over a long-running river water dispute with the neighboring state, with protesters setting cars and buses on fire and pelting people with stones. Riot police took to the streets, and public gatherings were banned in a bid to rein in the unrest, while police said the local metro network had been temporarily suspended. A Reuters witness saw a group of 20 to 30 protesters, some armed with sticks and stones, stopping and searching cars. A second witness saw smoldering tyres strewn across city streets, filling the air with the smell of burnt rubber. Local television showed flames pouring from burnt-out vehicles as angry crowds gathered nearby. The violence erupted after India's Supreme Court ordered Karnataka state, where Bengaluru is located, to release 12,000 cubic feet of water per second per day from the Cauvery River to the neighboring state of Tamil Nadu until Sept. 20. The river has been the source of more than a century of tension between the states, and there have been outbreaks of violence before. In 1991 an interim court order telling Karnataka to release water to Tamil Nadu sparked riots against Tamils in Bengaluru that left more than 18 people dead. "Rapid Action Force Teams have been deployed all over the city," Bengaluru city police said on Twitter on Monday. "We urge to all Bengalurians...Stay calm and not to panic." The police said later they had also imposed an emergency law known as Section 144, which prohibits gatherings in public areas. Rioters set ablaze 35 buses at a depot, paralyzing inter-state movement between Karnataka and Tamil Nadu, local media reports said. Young men crammed into mini-buses and rickshaws were seen shouting slogans and waving the red and yellow flag of Karnataka state. They pulled several Tamil Nadu-registered trucks and motorcycles to the side of the road and pelted them with stones, a Reuters witness said. At least one truck driver was beaten with a stick. The protesters let Karnataka-registered vehicles through the makeshift roadblock, the witness said. said more than 15,000 officers had been deployed to keep the peace including riot police and border security forces. Bengaluru is home to top Indian IT companies such as Infosys Ltd, Wipro Ltd and Mphasis as well as offices of several multinational companies like Samsung Electronics. Media reported a small number of attacks on Tamil-owned property in Karnataka, while Karnataka chief minister Siddaramaiah said on Twitter that he had asked his Tamil Nadu counterpart, J. Jayalalithaa, to investigate reports of violence in Tamil Nadu against people originally from his state. Disputes over water resources are common in India, where rising demand and poor management of supplies often lead to angry protests. –Reuters