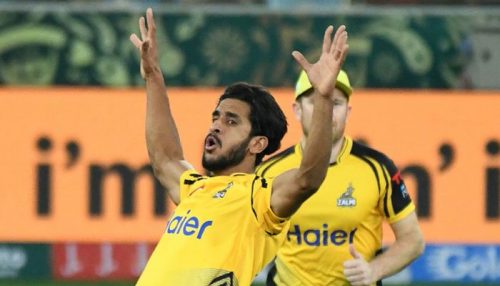 Hasan Ali drew the first blood for Peshawar Zalmi after picking two wickets in an over against Lahore Qalandars - eliminating the possibility of a fiery start from Zaman and Akhtar - in tonight’s second fixture at the Dubai International Cricket Stadium. Hasan Ali's bouncer and in-swingers were too hot to handle for the Qalandars' opening stand as the bowler with his sheer pace and seam departed the four opening batsmen, including skipper AB de Villiers. However, Peshawar Zalmi is playing to chase the 79 run target. 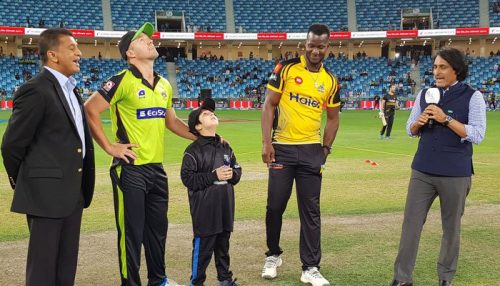 Earlier, Peshawar Zalmi have won the toss and decided to field first against Lahore Qalandars in the 7th match of the 2019 PSL on Sunday. It is worth mentioning here that skipper Mohammad Hafeez will be rested and South African batsman AB de Villiers will lead the Qalandars. Earlier, Lahore Qalandars stated that skipper Mohammad Hafeez will be rested; a day after the all-rounder was injured in a match against Karachi Kings. Hafeez was taken to the hospital following the match for scans and x-rays. He has been advised to rest for a few days and a timeline for his recovery will be known after further discussions with experts. On Saturday, the Qalandars' bowling side near decimated their Karachi competition to secure an assertive victory by a 22-run margin in the fifth match of the series.