DUBAI (92 News) – Former South African Wayne Parnell was a surprising top-scorer for Islamabad United with a 20-ball 41, inclusive of seven boundaries and a six while Asif Ali scored 36 and Hussain Talat made 30 in a total of 157-8. The win — second in as many games — lifts Quetta to the top of the table with four points while defending champions are pushed back to fourth with just points after one win and two losses. Quetta too were jolted early on, losing another Pakistan hopeful Ahmed Shehzad for two and Rilee Rossouw for ten but Watson ensured bowlers’ good work is not spoiled, first building the innings in company of Umar Akmal as the duo added 62 for the third wicket. Umar, who made a winning 75 in Quetta’s first win over Peshawar Zalmi, struck two sixes and five boundaries in his 28-ball 44 with five boundaries and two sixes.. When Umar was dismissed, caught and bowled by Cameroon Delport 64 were needed for victory. Watson added a further 67 for the fourth wicket with Sarfraz Ahmed who made 15 not out, smashing the winning boundary off pacer Rumman Raees. Watson said a fiery Umar made his task easier. “Umar batting like this made my job easier,” said Watson. “Umar took the pressure off me as it was a different wicket from last year’s and a bit of a challenge but nice to register a win.” Islamabad captain Mohammad Sami rued a no-ball dismissal of Watson when on 28. 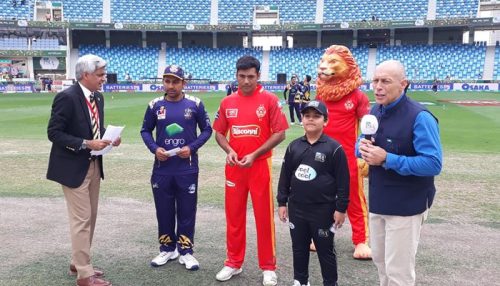 “Yes, if I did not hit the bails (its a no-ball if a bowler hit the bails with any part of the body while in his delivery stride) because Watson is in good form,” said Sami. “We recovered well after a poor start but wicket became easier after rain.” Quetta captain Sarfraz Ahmed was a happy man, praising his players. “We wanted to restrict them and that we did despite conceding many runs in the last four overs,” said Sarfraz. “That is the area of concern so we have to look at that but a nice win with Tanvir bowling so well and then Umar and Watson batting well.” Islamabad, put into bat by Quetta, lost their top order in a jiffy, as Twenty20 expert Tanvir got rid off the danger man Luke Ronchi off the very first ball of the match. Ronchi drove straight into the hands of Shehzad at covers, before trudging back to the pavilion. It became 0-2 with the promoted Shadab Khan’s wicket off the last delivery of the first over as Tanvir’s slower one was driven straight back into the bowler’s hands. Tanvir had a double wicket maiden to give Quetta an ideal start. Tanvir now has 120 wickets in the power-plays of Twenty20 cricket, making him the highest wicket-taker in the shortest format’s first phase of six overs. Promising opener Rizwan Hussain fell for third failure in HBL PSL as he was adjudged leg-before off spinner Mohammad Nawaz for five, as Islamabad reeled at 3-8. It was left to Talat and Cameroon Delport (19 off 20 balls with a boundary) to steady the ship with a 50-run stand for the fourth wicket. Pakistan-born Australian leggie Fawad Ahmed (3-15 off four overs) broke the stand by dismissing both Delport and Talat. Asif then tried to wield his bat aggressively, hitting two sixes and as many boundaries to lift Islamabad past 100-mark. He became Tanvir’s fourth wicket in the 17th over. It was Parnell who gave the needed impetus to Islamabad’s innings in the final overs,  adding 27 with Samit Patel (15 not out with two hits to the ropes) as Islamabad added 52 in the final five overs. Lahore Qalandars, who beat Karachi in their second game on Saturday, face Peshawar Zalmi — who lost to Quetta Gladiators on Friday — in the second match later Sunday.

Quetta Gladiators stands at no 1 with 0.436 net run rate at the PSL 2019 points table. The Gladiators have played only one match which they won comprehensively against the Peshawar Zalmi on Friday. At the end of Match 5, which the Lahore Qalandars won by 22 runs following is the latest points table.