LAHORE (92 News) – The players of Quetta Gladiators have on Thursday reached Lahore for the final of Pakistan Super League (PSL). The players who have reached Lahore include, Ahmed Shehzad, Zulfiqar Babar, Muhammad Nawaz, Umar Amin and Saad Naseem, while the teams assistant coach Abdul Razzaq has also reached Lahore. Among those who have reached Karachi were Head Coach Moeen Khan, Captain Sarfraz Ahmad, Asad Shafiq, Anwar Ali, Noor Wali and Mir Hamza. Earlier, the majority of Quetta Gladiators’ overseas contingent has opted not to travel to Lahore for the PSL final. 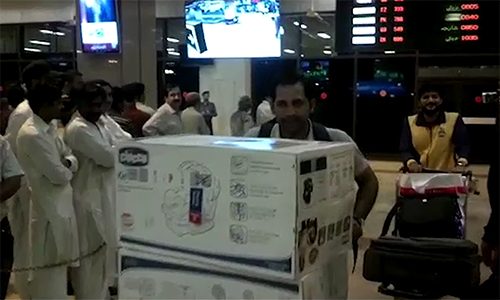 Kevin Pietersen, Luke Wright and Tymal Mills all tweeted about leaving the tournament, while former New Zealand offspinner Nathan McCullum will also not travel. Rilee Rossouw, the South African batsman, had been considering playing in the final on March 5, but he too wrote on Twitter that he was leaving the tournament. "It’s with a sad heart that I must announce that I will not be taking part in the final." Quetta Gladiators reached final of the tournament for the second time in a row as they defeated Peshawar Zalmi in a thrilling match. They will face the winner of Karachi Kings and Peshawar Zalmi in the final on 5 March. Talking to media in Karachi, Quetta Gladiators Captain Sarfraz Ahmad said that they will try to make a good team from the available players. He said that the performance of team will affect due to the unavailability of overseas players.