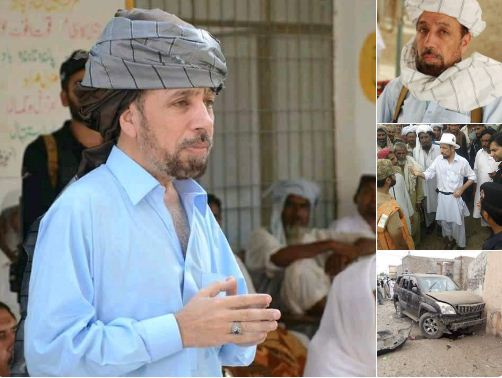 DERA ISMAIL KHAN (92 News) – Former provincial minister Ikramullah Khan Gandapur was martyred in a suicide blast near his car in Dera Ismail Khan on Sunday. Gandapur, who was the PTI’s candidate from PK-99, was initially injured along with 10 others in the attack in Kulachi tehsil. They were shifted to the District Headquarters Hospital DI Khan. Three policemen are said to also have been injured. The blast took place near the house of Faqeer Haroon, a political activist. A mutilated body was found near the vehicle. Police cordoned off the area. After the death of the former minister the Election Commission of Pakistan (ECP) has postponed the election in PK-99. A number of political leaders have been targeted in the month leading to the election. On July 13, BAP leader Nawabzada Siraj Raisani was killed along with at least 149 others as a suicide bomber detonated at an election rally in Mastung. A convoy of JUI-F leader Akram Khan Durrani also came under attack on July 13. On July 10, the ANP candidate from Peshawar’s PK-78, Haroon Bilour, and 21 others were killed in a suicide attack targeting the party’s election meeting.