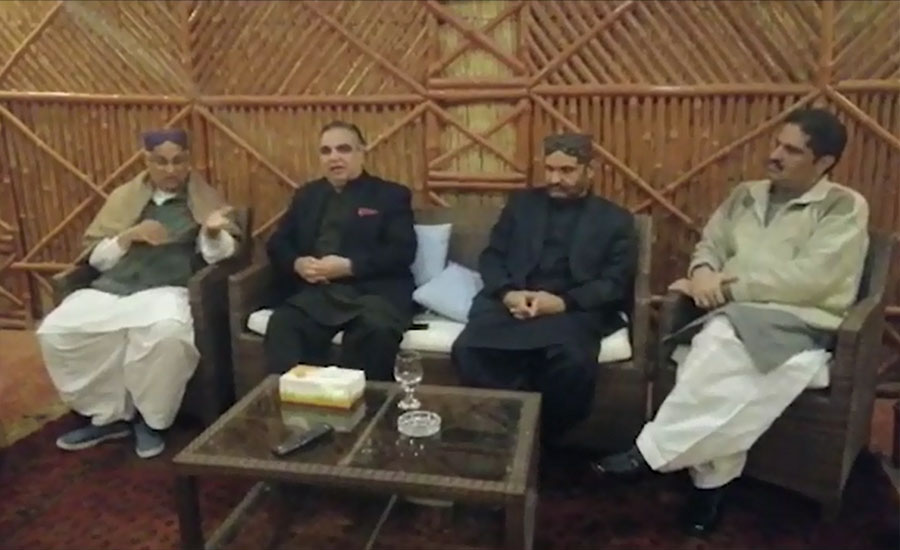 ISLAMABAD/KARACHI (92 News) – After appearance of Sindh Chief Minister Murad Ali Shah’s name in the JIT report, the Pakistan Tehreek-e-Insaf (PTI) has initiated a campaign to contact and held meetings with the allied parties to de-seat Sindh government. According to the details, Sindh Governor Imran Ismail, PTI leader Haleem Adil Shiekh and other party leaders are trying to contacts with the elcted members of assembly. Currently, the Sindh governor is conducting meetings with MQM, GDA leaders ahead of ‘uncertain’ political situation to bring about a change in the Sindh government after Ghotki. It is worth mentioning that this drive was started after appearance of Murad Ali Shah’s name in the JIT report of the money laundering and fake bank accounts case. Meanwhile, Prime Minister Imran Khan has given task to send Fawad to Sindh to take the party leadership and other allies into confidence on the current political situation. The PTI has decided to increase political pressure on Sindh Chief Minister Murad Ali Shah for his resignation after his name was added to the Exit Control List (ECL). The information minister is expected to head for consultative meetings with leaders of the Grand Democratic Alliance (GDA) and Muttahida Qaumi Movement (MQM) in Karachi, Badin, Sukkur and Larkana on Monday. Fawad will embark on a three-day visit of Sindh province tomorrow (Monday) on the instructions of Prime Minister Imran Khan to take the party leadership and allies into confidence over the current political situation. He will be visiting Sukkur, Badin and Larkana. He is likely to hold meetings with Pakistan Muslim League-Functional (PML-F) chief Pir Pagara, PTI’s Liaquat Jatoi, Zulfikar Mirza and Quomi Awami Tahreek (QAT) chief Ayaz Latif Palijo and others. The prime minister a day earlier telephoned PTI MPA Ali Gohar Mahar to discuss the emerging situation in the province. The lawmaker apprised the premier of the political situation and invited him to visit the province. PM Khan expressed concern over the situation and accepted the invitation to visit Sindh soon. According to a PTI spokesperson, the prime minister will meet key political leaders during his visit to Sindh. On Saturday, Minister for Information Chaudhry Fawad Hussain discussed the latest political situation in the province with Governor Imran Ismail. Meanwhile, PTI’s Leader of Opposition in the Sindh Assembly Firdous Shamim Naqvi chaired a consultative meeting with the Grand Democratic Alliance leaders in Karachi to bring a ‘vote of no confidence’ against the chief minister. The alliance’s MPAs also attended the meeting, while the Muttahida Qaumi Movement (MQM) did not attend. Moreover, PTI’s Haleem Adil Sheikh, who was elected as a member of Sindh Assembly from PS-99 (Karachi East-I), has claimed that following the possible arrest of PPP Co-Chairman Asif Ali Zardari, the party might split into many factions. He disclosed that the party’s 20 MPAs are in contact with him for their possible shift to the PTI. Sindh Governor Imran Ismail vowed that the PTI would continue to support the accountability process and rule of the law. He rejected the impression that protests or a ‘constitutional war’ could affect the accountability process. Speaking to the media in Sukkur, he said, “I am not aware of the imposition of Governor’s Rule in Sindh,” he said. He said public representatives should work effectively to implement better policies for the general public. He lamented the PPP’s threats and asked which field it was asking to fight in.