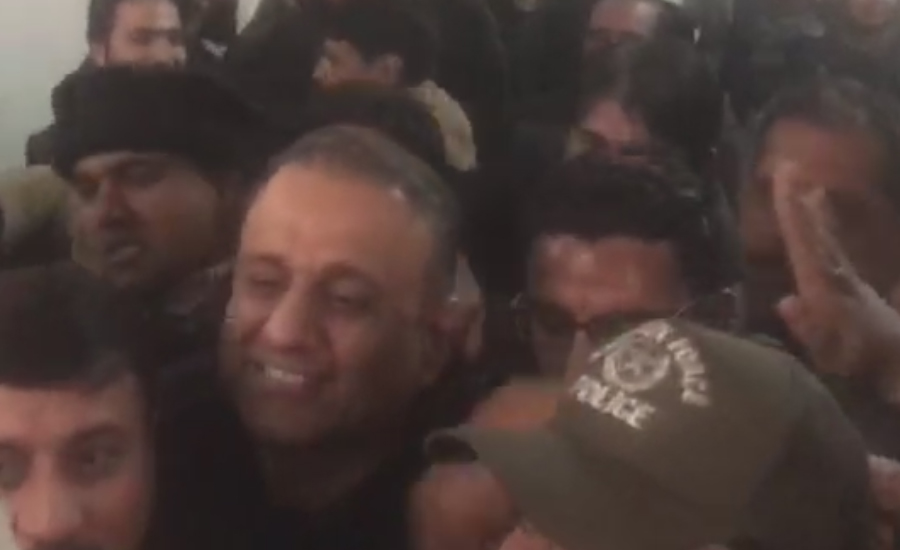 LAHORE (92 News) – Accountability Court Judge Najamul Hassan on Thursday remanded PTI leader Aleem Khan in the custody of the National Accountability Bureau (NAB) for nine days. The NAB prosecutor told court that the agency had to conduct basic investigation into the case of assets beyond known sources of income and offshore companies. He demanded 15-day remand of Aleem Khan. Aleem Khan’s counsel contended that his client had appeared before the NAB whenever he was called and there is no need of the physical remand. Aleem Khan said that no company or flat was out of the tax record. “I solemnly admit that he does not know about the letter sent by his counsel to the NAB. The NAB chief is annoyed with me over the letter. When appeared before the NAB, I was told that the letter was intolerable,” he said. He was produced in court amid tight security. A large number of PTI workers also reached outside the court. After the hearing, Abdul Aleem Khan was taken back to the Lahore NAB Office. He will again be produced on February 15. According to a press release issued by the Lahore NAB, Aleem Khan was arrested for owning assets beyond his known sources of income. Khan faces multiple inquiries, including one involving offshore company Hexam Investment Overseas Ltd, one for owning assets beyond his known sources of income, and inquiries into his involvement in the Park View Housing Society and River Age Housing Society. The press release alleged that Khan had misused his authority as secretary general of the Park View Housing Society and as a past member of the provincial assembly, abusing his position to acquire assets beyond his known sources of income. The NAB had in January 2018 sought the record and details of offshore companies reportedly established in tax havens abroad by Aleem Khan and PML-Q's Chaudhry Moonis Elahi. A Mutual Legal Assistance report pertaining to Khan's case was provided to NAB Lahore earlier in January this year, following which the PTI leader was summoned on Feb 6. According to the press release, Aleem Khan had started a real estate business in which he invested tens of millions of rupees. He bought 900 kanals of land and a further 600 kanals of land through a company set up for this purpose, A&A Private Ltd. However, according to the accountability bureau, the PTI leader was unable to show the sources of income with which he purchased the land. The NAB further alleged that Khan set up multiple offshore companies in the United Arab Emirates (UAE) and Britain in 2005 and 2006, using them to purchase assets that cannot be explained by his means.