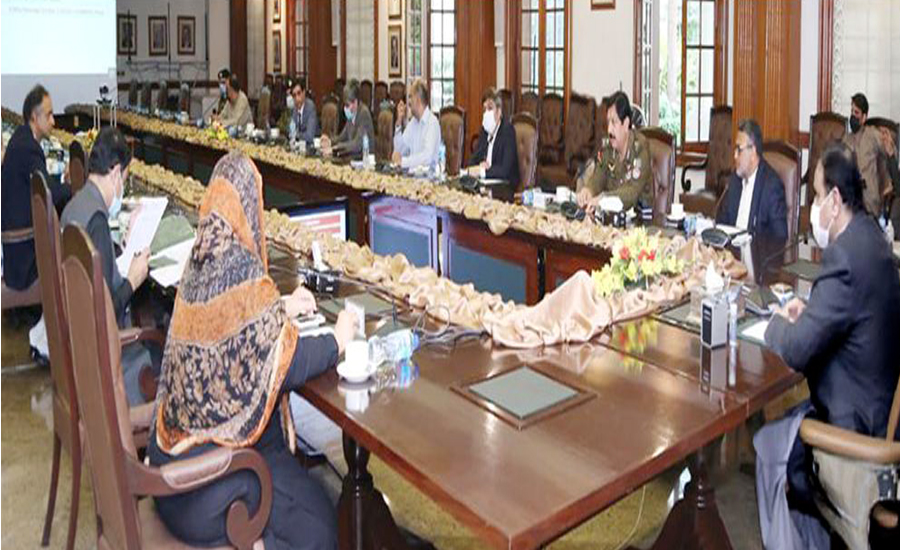 LAHORE (92 News) – Chief Minister Punjab Sardar Usman Buzdar chaired a meeting of the Cabinet Committee for the eradication of corona and expressed concern over an increase in the number of patients in Lahore and other districts.

It decided to take steps for securing the lives of the common man in cities with a more than five per cent positive corona test ratio.

The meeting resolved to ban sports activities, jashan-e-baharan and public meetings in Lahore and particular cities for two weeks. Similarly, holding marriage ceremonies in marquees and marriage halls will be banned for two weeks. It was further decided to close markets after Maghrib while milk and yoghurt shops, medical stores and tandoors will be exempted from this prohibition.

According to the decision, only takeaways will be allowed from restaurants and the meeting further approved to close down shrines and cinema halls for two weeks. Meanwhile, parks will be shut down at 6pm. Half the staff will work from home and the rest of the officials will be allowed to perform duties in the offices, the meeting settled. The meeting chose to limit the number of passengers in public transport especially the metro bus service and orange line metro train according to the SOPs.

These arrangements will apply to cities with more than five per cent corona positive test rate from Sunday and will remain enforced for the next two weeks. The primary and secondary health department will issue a notification in this regard.

The CM maintained that corona positive cases were being increased adding that every possible step will be taken as public health is most important. The decisions have been taken in the larger public interest and more steps can also be taken after a review of the situation, he maintained.

Secretary primary and secondary health briefed that 1,632 new cases were reported and 36 others died of the corona during the last 24 hours and this number was also reported on June 24, 2020. The number of patients is increased and children are also being affected while the ratio of the positive test has increased to 8 per cent in Lahore. It was further briefed that more than one lac health workers have been vaccinated and elderly citizens are also being vaccinated.