Punjab cracks down on child marriage 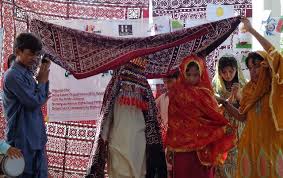 Punjab cracks down on child marriage

LAHORE - Clerics in Pakistan’s most populous province of Punjab will be punished if they allow underage marriages along with the parents of the youngsters under tougher penalties imposed by the second Pakistan province to act to curb child marriage. The Punjab Child Marriage Restraint Act increases the possible jail term for breaking the law to six months from one month and raised the potential fine to Rs50,000 (US$490) from Rs1,000 (US$10) for both parents and clerics. It is the first time that clerics will face penalties for officiating at underage marriages with the move coming as Pakistan authorities try to crack down on children marriage. Over 40 percent of Pakistani brides are under 18 while eight percent of adolescent married women are already mothers between the ages of 15 and 19, according to Save the Children figures. "The Act has been enacted to curb the menace of child marriages prevalent in the country and to save the women from exploitation," Punjab Law Minister Mujtaba Shujaur Rehman told local media. Khawar Mumtaz, chair of the National Commission on the Status of Women (NCSW), a statutory body established in 2000, said child marriage destroys the life of a girl. "It deprives her of education, right to development and growth and exposes her to health risks and gender-based violence," she said. Currently women can legally marry at 16 in Pakistan and men at 18 but marrying younger forces many out of education. Women marrying before puberty are also deemed at risk from pregnancies that could endanger their health and even lives. There are no reliable statistics on the number of child marriages in Pakistan as few cases are reported to the police and the government does not track the issue. But a non-governmental organization, Sahil, in its annual report ‘The Cruel Number 2013’ recorded 96 cases of child marriages in the country of 182 million people, an increase of 21 percent from 2012. However a Pakistani helpline for women and children, the Madadgar Helpline, recorded 42 cases of early and forced marriages in the first four months of 2014. Of the cases recorded by Sahil, 43 percent were in southern Sindh province, 30 percent in Khyber Pakhtunkhwa and 25 percent cases in Punjab. No cases of early child marriage were reported in Pakistan's fourth province, Balochistan. The Sindh Assembly was last year the first provincial assembly to amend legislation dating back over 80 years to criminalize underage marriage, passing a law that imposes fines and jail terms for brides and grooms aged under 18 as well as for their parents. - Reuters