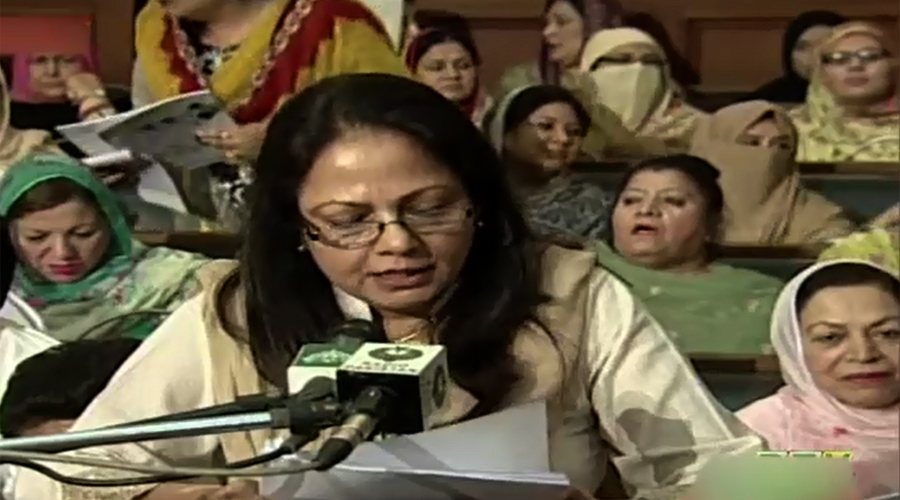 LAHORE (92 News) – Punjab Finance Minister Ayesha Ghaus Pasha presented Rs1681 billion budget for the FY2016-17 amid uproar by the opposition on Monday. Unveiling the budget, she said that education, health, agriculture and clean drinking water are top priorities of the government. According to the break-up, an amount of Rs550 billion has been earmarked for the development programme. A sum of Rs50 billion has been allocated for the Kisan Package, while Rs236 billion for education and Rs46.86 billion for higher education. An overall amount of Rs43.83 billion has been earmarked for the health sector. Rs30 billion has been proposed for clean drinking water project. The minister announced to create 500,000 employment opportunities. She also announced a 10 percent increase in the salaries and pension of government employees. The minimum wages of unskilled workers have been fixed at Rs 14,000. The stipend for girls from Class 6 to 10 has been proposed Rs 1,000 per month in Southern Punjab. An increase of 62 percent has been made in the budget for the health sector, while the agriculture budget received a 47 percent increase. An increase of 88 percent has been made in the clean drinking water project. Moreover, a tax of Rs 5,000 has been imposed on medical consultants, specialists and dental surgeons. Property dealers will have to pay a tax of Rs 100,000 per year. On the other hand, a 16 percent tax has been imposed on cosmetics, plastic and hair transplant surgeon. During the budget session, the opposition members resorted to hooliganism and chanted the slogans of ‘Lie, lie’. They also tore the budget copies and lodged their protest by standing on desks. PA Speaker Rana Iqbal repeatedly tried to control the House.