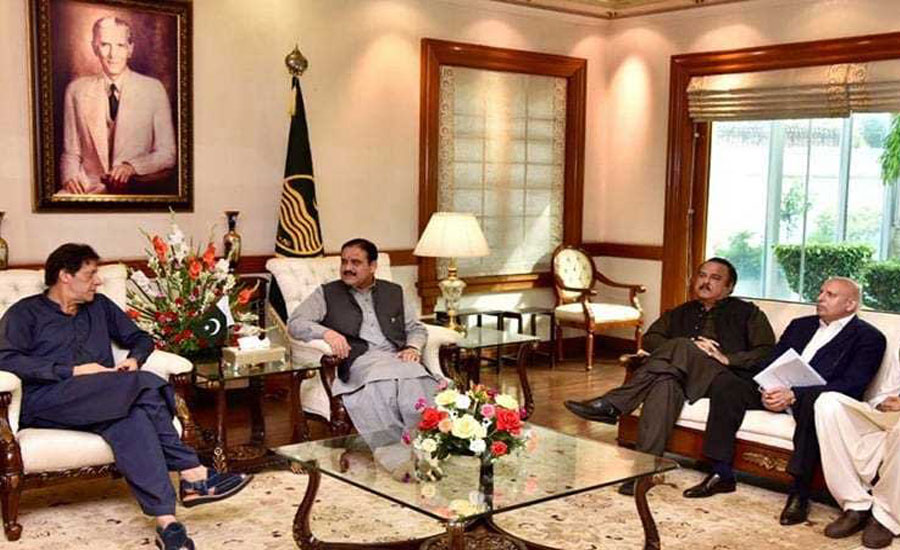 ISLAMABAD (92 News) – Prime Minister Imran Khan on Sunday met with the Punjab leadership including provincial Chief Minister Usman Buzadar and Governor Chaudhry Sarwar. During the meetings, the Punjab chief minister and the governor briefed the prime minister on the current political situation in the province. Chairman Executive Council South Punjab Province Tahir Bashir Cheema was also present in the meeting. The matters related to South Punjab province also came under discussion in the meeting. A day earlier, Special Assistant of Prime Minister on Political Affairs Naeemul Haque confirmed that 15 provincial legislators of PML-N have met PM Imran Khan at his Bani Gala residence. Naeemul Haque in his Twitter message termed the major development as the emerging differences between the provincial legislators and PML-N top leadership. “The meeting lasted for 1.5 hours at Bani Gala,” said Naeemul Haque. He hinted that the Bani Gala meeting was held as “CM Punjab had brought them [PML-N MPAs] over.” Haque said that the PML-N’s provincial legislators expressed their full confidence in PM Imran Khan and the Punjab chief minister Sardar Usman Buzdar.

The hopes of PMLN MPAs from Punjab continue to get shattered with their party as was obvious in their today’s meeting with the PM. 15 MPAs of PMLN met PM at Bani Gala for 1 1/2 hours. CM Punjab had brought them over. They expressed full confidence in PM and the CM.

“The hopes of PMLN MPAs from Punjab continue to get shattered with their party as was obvious in their today’s meeting with the PM,” he tweeted.