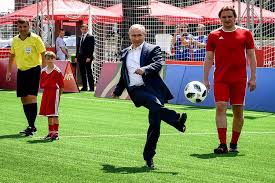 MOSCOW (Reuters) - President Vladimir Putin congratulated Russia’s World Cup team for its win over Spain in a phone call to the manager, the Kremlin said on Sunday, as the host country marked the surprise victory with raucous street celebrations.
Russia entered the soccer World Cup ranked by FIFA as the tournament’s weakest side, but has defied expectations by beating Saudi Arabia and Egypt easily and now reaching the quarter-finals. The unexpected success of the national team has been a political boon for Putin, but the Russian president has attended only Russia’s opening World Cup match. Putin was unable to attend the game against Spain at Russia’s flagship Luzhniki stadium in Moscow because of his busy schedule, Kremlin spokesman Dmitry Peskov was quoted as saying by Interfax news agency, adding Putin watched the game remotely. “Just like the whole country, Putin watched the game from start to finish and cheered for our (lads),” Peskov said. After the match, Moscow erupted in street celebrations with throngs of people dancing in squares, street musicians playing the national anthem and fans chanting “Russia!” Putin called Russia manager Stanislav Cherchesov before the game to wish him luck and again after it to congratulate him, he said. Russian Prime Minister Dmitry Medvedev attended the game, watching with his wife from the stands. He later posted a photograph on social media.