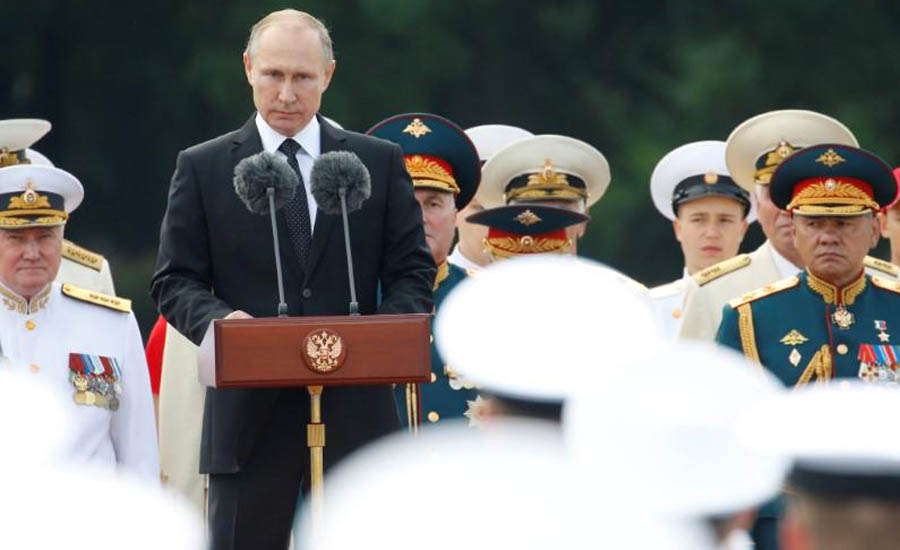 MOSCOW/WASHINGTON - President Vladimir Putin said the United States would have to cut its diplomatic staff in Russia by 755 people and that Moscow could consider additional measures against Washington as a response to new US sanctions approved by Congress. Moscow ordered the United States to cut hundreds of diplomatic staff and said it would seize two US diplomatic properties after the US House of Representatives and the Senate overwhelmingly approved new sanctions on Russia. The White House said on Friday that US President Donald Trump would sign the sanctions bill. Putin said in an interview with Vesti TV released on Sunday that the United States would have to cut its diplomatic and technical staff by 755 people by Sept. 1. "Because more than 1,000 workers - diplomats and support staff - were working and are still working in Russia, 755 must stop their activity in the Russian Federation," he said. The new US sanctions were partly a response to conclusions by US intelligence agencies that Russia meddled in the 2016 US presidential election, and to punish Russia further for its annexation of Crimea from Ukraine in 2014. Russia's response suggested it had set aside initial hopes of better ties with Washington under Trump, something the Republican president, before he was elected, had said he wanted to achieve. A federal law enforcement investigation and multiple US congressional probes looking into the possibility that Trump's campaign colluded with Russia have made it harder for Trump to open a new chapter with Putin. Russia denies it interfered in the election and Trump has said there was no collusion. Moscow said on Friday that the United States had until Sept. 1 to reduce its diplomatic staff in Russia to 455 people, matching the number of Russian diplomats left in the United States after Washington expelled 35 Russians in December. On Friday, an official at the US Embassy, who did not wish to be identified, said the embassy employed about 1,100 diplomatic and support staff in Russia, including Russian and US citizens. 'Uncalled-for Act' The State Department declined to comment on the exact number of embassy and consular staff in Russia. But a State Department official called Russia's action "a regrettable and uncalled-for act." "We are assessing the impact of such a limitation and how we will respond to it," the official said on condition of anonymity. As of 2013, the US mission in Russia, including the Moscow embassy and consulates in St. Petersburg, Yekaterinburg and Vladivostok, employed 1,279 staff, according to a State Department Inspector General's report that year. That included 934 "locally employed" staff and 301 US "direct-hire" staff, from 35 US government agencies, the report said. That breakdown suggested the actual number of Americans forced to leave Russia would be far less than 755. "We dont (sic) have 755 American diplomats in Russia," said Michael McFaul, a former US ambassador to Russia, in a post on Twitter on Sunday. The cuts would likely affect how quickly the United States is able to process Russian applications for US visas, McFaul said. "If these cuts are real, Russians should expect to wait weeks if not months to get visas to come to US," he said. Putin said Russia could take more measures against the United States, but not at the moment. "I am against it as of today," Putin said in the interview with Vesti TV. He repeated that the US sanctions were a step to worsening relations between the two countries. "We were waiting for quite a long time that maybe something would change for the better, were holding out hope that the situation would change somehow. But it appears that even if it changes someday it will not change soon," Putin said. He said Moscow and Washington were achieving results on cooperation, however, even "in this quite difficult situation." The creation of the southern de-escalation zone in Syria showed a concrete result of the joint work between the two countries, Putin said. -Reuters