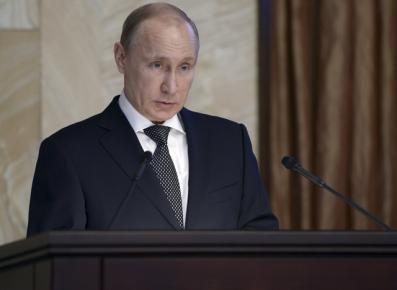 MOSCOW - President Vladimir Putin accused Western spies on Thursday of plotting to undermine his rule and "destabilize" Russia before elections by using public organizations for their own goals. At a meeting of Russia's Federal Security Service, a successor to the Soviet-era KGB, Putin took aim at non-governmental groups which receive foreign funding, saying Moscow would not relax its scrutiny of their activities. "The attempts by Western security services to use public, non-governmental organizations and non-political groups for their own benefit, mostly to discredit the authorities and destabilize the situation in Russia, have not stopped," Putin was quoted as saying by Interfax news agency. "Actions are being planned for the time before the election campaigns in 2016 and 2018," the former KGB spy told leading members of the FSB, referring to next year's parliamentary election and a later presidential poll. In 2012, after mass protests against him, Putin approved a law to force non-governmental organizations which engage in "political activity" to register with the Justice Ministry as "foreign agents" and file a report to officials every quarter. Opposition groups say Putin is trying to silence groups which criticize his human rights record and fueled the biggest protests against him in 2011-2012. Since then, critics say he has raised pressure on foreign-funded groups which criticize his stance on Ukraine, where pro-Russian separatists in the east are fighting government forces. Putin said he was always open to dialogue with the opposition, which since the protests has lacked the unity to pose a real threat to the Russian leader and whose leaders fear for their security after the murder last month of Boris Nemtsov, one of the organizers of the mass protests three years ago. "We always listen to constructive criticism of the authorities' action or lack of action at any level and this dialogue is always useful and simply necessary," he said. "But it would be pointless to have debates with those who take orders from an outsider, in the interest of ... another country." He praised the security services for thwarting the work of more than 300 foreign spies and agents and called on them to tighten procedures to protect state secrets, especially about the military, as today "it was especially important". - Reuters