Putin on track for commanding win as Russians head to polls 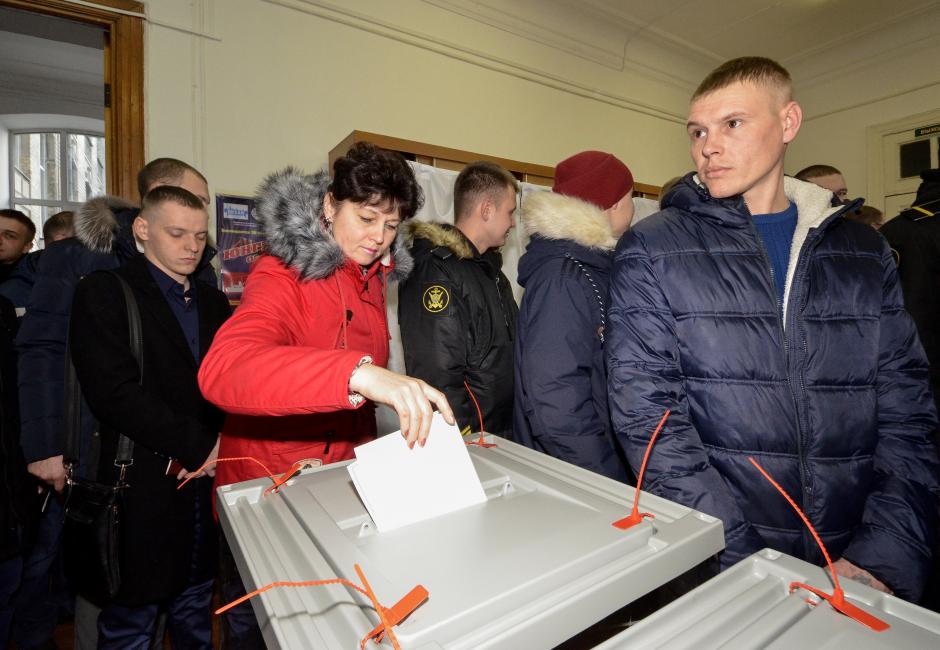 Putin on track for commanding win as Russians head to polls

PETROPAVLOVSK-KAMCHATSKY (Reuters) - Russians began voting in a presidential election on Sunday set to give Vladimir Putin a commanding victory that could only be deface if large numbers do not bother taking part because the result is so predictable.

On Russia’s eastern edge, in the Pacific coast city of Petropavlovsk-Kamchatsky, polling stations opened at 2000 hrs GMT, and voting across the vast country will run until polls close at the westernmost point, the Kaliningrad region, 22 hours later.

Opinion polls give Putin, the incumbent, support of around 70 percent, or nearly 10 times the backing of his nearest challenger. Another term will take him to nearly a quarter century in power — a longevity among Kremlin leaders second only to Soviet dictator Josef Stalin.

Many voters credit Putin, a 65-year-old former KGB spy, with standing up for Russia’s interests in a hostile outside world, even though the cost is confrontation with the West.

A row with Britain over allegations the Kremlin used a nerve toxin to poison a Russian double agent in a sleepy English town — denied by Moscow — has not dented his standing.

The majority of voters see no viable alternative to Putin: he has total dominance of the political scene and the state-run television, where most people get their news, gives lavish coverage of Putin and little airtime to his rivals.

“He (Putin) is our president. We take pride in him,” said Marianna Shanina, a resident of the Crimea region. Russia annexed Crimea from Ukraine four years ago, earning Putin admiration from many Russians and condemnation from the West.

“We wish him victory at the election. Our whole family will vote for Putin. Putin! Good health to you, beloved president!,” Shanina said at a Putin election rally.

A March 9 survey by state-run pollster VTsIOM gave Putin, who was first elected president in 2000, support of 69 percent. His nearest rival Pavel Grudinin, the Communist Party’s candidate, is on just 7 percent.

The first politician in years to challenge the Kremlin’s grip on power, Alexei Navalny, is barred from the race because of a corruption conviction he says was fabricated by the Kremlin.

He is calling for a boycott of the election, saying it is an undemocratic farce, and deploying supporters to collect evidence of anyone rigging the ballot to inflate turnout and support for Putin. The Kremlin and election officials say any fraud will be stamped out.

Kremlin officials privately acknowledge a worry that some of Russia’s 110 million eligible voters will not bother casting ballots because they believe Putin is a shoo-in. A low turnout would diminish his authority in his next term, which, under the constitution, has to be his last.

“There is no intrigue. I do not see any point for me in going to the election,” said Alexei Khvorostov, a resident of Krasnodar, in southern Russia.

In an address to the nation broadcast on national television on Friday, Putin said voters held the fate of the country in their hands.

“I therefore ask you to come to the polling stations on Sunday, use your right to choose a future for the great Russia that we love.”

In Khabarovsk region, on Russia’s Pacific coast, local officials delivered supplies of eggs, tinned peas, and frozen pike to polling stations. It will be sold to voters on polling day at a discount of between 10 and 30 percent compared to prices in local shops.

“By doing this we hope to attract voters to the polling stations and we think we can increase turnout,” said Nikolai Kretsu, chairman of the consumer market committee in the regional administration. “The second objective is to strengthen allegiance towards the authorities.”