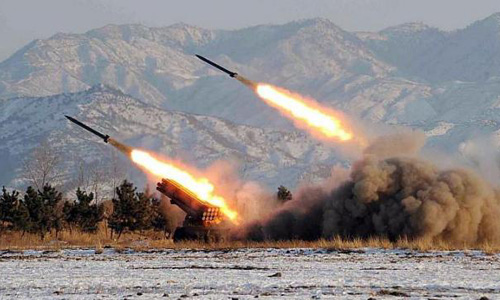 SEOUL – North Korea has declared a no-sail zone for its ships off its east coast, South Korean media reported on Monday, suggesting more missile launches are possible before the US defence chief visits Seoul this week. Pyongyang fired four short-range missiles off its west coast on Friday in what South Korea called a bid to stoke tension during its annual joint military drills with the United States. The two Koreas are locked in a tense standoff, trading harsh rhetoric recently over the arrest by Pyongyang of two South Korean nationals it accused of espionage. It was not clear if the latest warning for ships to stay clear of an area off the Korean peninsula's east coast was a direct indication of an imminent missile launch. "There are no signs of peculiar movements," South Korean defence ministry deputy spokesman Na Seung-yong told a briefing. Na said a no-sail warning had not been sent to Seoul or the International Maritime Organisation (IMO). North Korea has reported to the IMO before previous long-range missile launches, which it has claimed were rockets to launch satellites. The North is under UN sanctions banning it from developing ballistic missile technologies. US Defense Secretary Ashton Carter is due to start a three-day visit to South Korea on Thursday. South Korea's Yonhap News Agency quoted unidentified government officials as saying the no-sail warning has been in effect since April 1 and could indicate that a launch of a mid-range Rodong missile was "possible", according to an official quoted by Yonghap. North Korea last test-fired its mid-range Rodong missile, which has a design range of 1,300 km (800 miles), in March 2014, while the leaders of South Korea, Japan and the United States were meeting to discuss the threat from the North. Pyongyang did not issue a no-sail warning before that launch. North Korea frequently test fires short-range missiles into the sea, often in what are seen as a response to the US-South Korean drills, which it denounces as a preparation for war. Last month, North Korea tested two short-range missiles off its eastern coast without designating a no-sail zone, drawing protest from Japan. North Korea, which has threatened to carry out a fourth nuclear test, could be close to being able to put a nuclear warhead on a missile, some experts say, with the mid-range Rodong the most likely to be used. Its leader, Kim Jong Un, visited one of its navy units, supervising torpedo attack drills, state media said on Saturday. –Reuters