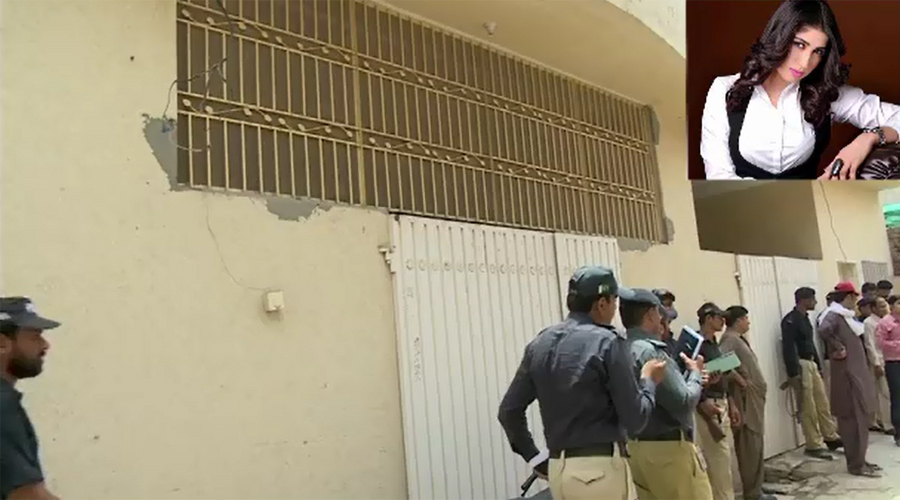 MULTAN (92 News) – Renowned model Qandeel Baloch has been strangled by her brother for honor on Saturday. She had been living in her ancestral house for the last week. After getting information, a huge contingent of police reached the spot. After preliminary investigations, the police have shifted the body to Nishtar Hospital Multan for autopsy. The police said that teams had been formed to arrest her brother Waseem who would be arrested soon. Sources in the police said that her body had been shifted to the mortuary freezer as no one came to receive it. They said that the parents of Qandeel Baloch were also being investigated. Her father told the media that his son Waseem with his accomplice had murdered Qandeel. According to the autopsy report, Qandeel Baloch was murdered by placing a pillow on her face, while her neck carries nail marks. However, no mark has been found on other body parts. In the report, it is being suspected that she had been administered intoxicated material. Samples of her body have been sent to Lahore Forensic Laboratory for analysis. Qandeel Baloch , who was born in 1990, remained in spotlight for her fearless statements and controversial videos. She got fame in social media after her failure to get a place in the showbiz. She was willing to tie the knot with PTI chairman Imran Khan and she had expressed her intention several times in the media. Her selfies with Mufti Abdul Qavi were much publicized in the media a few weeks ago. She admitted that she had married in 2008, but later divorced. Two people had claimed their marriage with Qandeel Baloch. Qandeel Baloch, while disclosing threats to her life sometime back, had appealed to the government to provide her security. However, the government did not provide her security. Meanwhile, Baktawar Bhutto has condemned her murder, saying that there was no room for murder in name of honor. Federal Minister for Human Rights Kamran Michael has condemned the murder of Qandeel Baloch. “We condemn the murder of Qandeel Baloch in the name of honor,” he said. The minister vowed to bring the killers of Qandeel Baloch to justice.